Who is Hatsune Miku?

Where does Hatsune Miku come from? 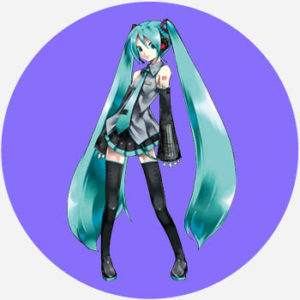 Hatsune Miku was one of the first character personas developed by Crypton Future Media for their Vocaloid software. She debuted in 2007.

Vocaloid is an advanced voice synthesizer software. Musicians can input melodies and lyrics and the program, like a virtual signer, will perform it to produce new songs. Hatsune Miku is one the digital voices musicians can use, and to promote her, Crypton Future Media gave Hatsune Miku a profile and personality.

Her name is from the Japanese characters for first, sound, and future, so her name means “first sound from the future.” According to her backstory, Hatsune Miku comes from a not-so-distant future where music was lost. She emerged as a 16-year-old singing android who reintroduced the skills to the world.

Although there are other Vocaloids, Hatsune Miku is perhaps the most well-known. She has a distinctive look; she’s an anime-style cartoon character with long teal hair pulled back in two ponytails. She’s performed real-life 3D concerts to audiences worldwide, has hit the top of Japanese album charts, collaborated with and opened for other artists including Lady Gaga, and appeared on David Letterman.

Part of the reason that Hatsune Miku is so popular is that she was created to be collaborative. The original illustrations of her are licensed under Creative Commons, and there’s a large community dedicated to creating and sharing songs for her. So far, Crypton Future Media boasts that over 100,000 songs have been produced using her vocal software.

The popularity of Hatsune Miku has led to a staggering variety of merchandise—and not just action figures, but also products such as video games and lingerie. The virtual singer has become a veritable pop star in her own right. Hatsune Miku is used, then, not just to refer to songs made using her Vocaloid software, but also to Hatsune Miku’s aesthetic.

This is not meant to be a formal definition of Hatsune Miku like most terms we define on Dictionary.com, but is rather an informal word summary that hopefully touches upon the key aspects of the meaning and usage of Hatsune Miku that will help our users expand their word mastery.