Hoodini is a magic owl character used as an inside joke in internet and gaming culture.

Where does Hoodini come from? 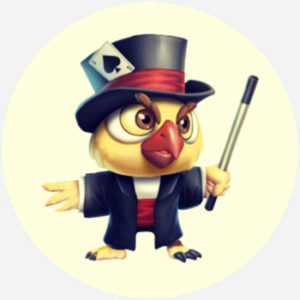 Hoodini is a pun-inspired name for a fictional magic owl character, which combines the hoo sound made by an owl with the surname of famous magician, Harry Houdini.

The popularity of the term dates back to June 22, 2015, when user VanossGaming posted a video to YouTube titled “GTA 5 Online Funny Moments.” The video depicts a character from the video game Grand Theft Auto V wearing an owl mask telling a joke at a comedy club in the game: “What do you call a magic owl?…Hoodini!” The word, accompanied by an image of a cartoon owl wearing a black magician’s hat, appears on the screen during the delivery of the punchline.

On June 28, Hoodini became an owl-based “skin” (modified appearance) on Minecraft. In July, a Hoodini add-on weapon for the game Garry’s Mod was posted to the Steam community forums. The term hit Urban Dictionary that same month, and Hoodini products were being sold on the online store RedBubble. Makeup artist MsMaoMaoz even posted a video to Instructables explaining how to make a Hoodini mask. In 2017, the term—and accompanying joke, which ostensibly predate the 2015 YouTube video—appeared in an unofficial Harry Potter “joke book” by Brian Boone.

// Does she have a magical owl named, Hoodini?! XD
@WiccanTitan, June, 2016
You know who else loves you..... HOODINI!
@AOwlNamedVanoss, March, 2016
Yeah yeah, a Hoodini. I don't even know why I'm answering this.. These are a few magic owls from literature...
Eve van Kaathoven, Quora, January, 2018
SEE MORE EXAMPLES

Though Hoodini is a fictional character, he does not have an established personality or backstory. The term Hoodini simply refers to an owl with magical abilities, usually wearing a black top hat. The character has been co-opted by many game developers and meme makers. The name, likeness, and general character of Hoodini, then, has become an inside joke, shared among those who know the original video, similar to the Dopefish memes from the 1990s Commander Keen games.

As a result, the term Hoodini is usually seen or heard in the gaming community. However, the meme’s growth led to it being used as a non-sequitur response to questions in YouTube comments, likely alluding to Hoodini as the cheesy punchline to a bad joke. As a result, some might use the term Hoodini without knowing its internet provenance.

There is also a musical artist named DJ Hoodini, whose moniker appears unrelated.

This is not meant to be a formal definition of Hoodini like most terms we define on Dictionary.com, but is rather an informal word summary that hopefully touches upon the key aspects of the meaning and usage of Hoodini that will help our users expand their word mastery.