Hard-edged but warm-hearted, Ichigo is a spiky-haired protagonist of the anime and manga series Bleach.

Where does Ichigo come from? 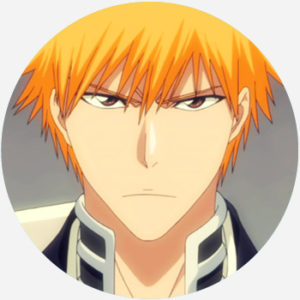 The Japanese manga Bleach, created by Tite Kubo, was first published in English in May 2004, with the anime becoming available in America in September that year. Viz Media, the company that published the standalone manga, also published chapters of the manga in the leading manga anthology magazine, Shonen Jump, starting in 2007.

Ichigo, as the main character, garnered a lot of attention, especially as the manga topped sales charts in America. The anime also did well, as the dubbed release of Bleach was highly rated on Cartoon Network’s Adult Swim programming block. Later on, it even became streaming-service Hulu’s ninth most-viewed animated TV show in 2009 and remained one its top animated programs for years after. Critics credit the series’ initial success to its great art, fleshed-out characters, and dramatic fight scenes. People were taken by Bleach and especially Ichigo, popularly ranked as one of the best anime characters of all time.

The series begins in an exciting way, further contributing to its success. Ichigo encounters Rukia, who has tracked an evil spirit known as a Hollow to Ichigo’s house with the intention of fighting it to keep others safe. After being injured by it, Rukia transfers some of her mysterious Soul Reaper powers to Ichigo, allowing him to fight Hollows. The rest of the series sees Ichigo fighting to protect innocents from these spirits.

Ichigo’s popularity is due in part to his complex character. In the series, Ichigo is taller than average and has a full head of wild, spiky orange hair. He’s usually dressed in slim-fitting black clothes, as is typical for a Soul Reaper in the series’ fictional universe. He’s grumpy, but likeable, and, with his short temper, isn’t afraid to get into fights. In a fight, he’s known to be cocky, taunting opponents while engaged in battle. Inside and outside of battle, he works hard to maintain a cool, tough-guy persona. Despite this, he’s also compassionate and warm-hearted toward those he’s close to, which drives him to protect them from threats like the Hollows.

because of the fact that my siblings were all weebs and loved bleach it's been rooted in my brain that ichigo is strawberry
@saltymalt, February, 2018
Upon learning of the travesty that is the canon ending, I set out to create an alternate universe that correctly pairs Ichigo and Rukia together, as is good and proper.
ichiruki-ga-daisuki, Tumblr, January, 2018
Although he’s the hero of one of the most popular manga series in the U.S. and Japan, Ichigo Kurosaki has little in common with conventional good guys.
Charles Solomon Los Angeles Times, August, 2008
SEE MORE EXAMPLES

As he’s a character in a series, Ichigo normally appears in discussions about Bleach. Many of these are discussions about potential pairings, such as with Rukia or Orihime. This also extends to fanfiction and fanart, which continues to be produced after the series has ended.

Part of the fandom involves speculation and headcanons. For example, some may wonder how Ichigo might act in certain situations, like how he’d ask someone on a date. They might also speculate about the plot, such as if Ichigo was responsible for getting a significant villain put back in prison.

With the cancellation of both the anime and manga series in 2012 and 2016 respectively, Ichigo comes up in discussions about the apparent decline in quality that ultimately led to the downfall of Bleach. Some fans believe that the plot became repetitive, causing Ichigo to feel like a boring 2D character with ill-defined aspirations and motivations, as he didn’t change much as the series progressed.

This is not meant to be a formal definition of Ichigo like most terms we define on Dictionary.com, but is rather an informal word summary that hopefully touches upon the key aspects of the meaning and usage of Ichigo that will help our users expand their word mastery.