What is JoJo’s Bizarre Adventure?

JoJo’s Bizarre Adventure is a long-running anime and manga series about the Joestar family and their battles against supernatural forces.

Where does JoJo’s Bizarre Adventure come from? 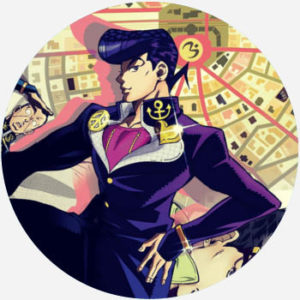 Written and illustrated by Hirohiko Araki, JoJo’s Bizarre Adventure, often shortened to JoJo or JJBA, was first published in 1987. The series is divided into eight different stories, with various chapters following different characters, all members of the Joestar family and all nicknamed JoJo. For example, Part I (Phantom Blood) follows Jonathan Joestar, and Part II (Battle Tendency) his grandson Joseph Joestar. Part VIII (JoJolion), starring the character Josuke Higashikata, began in 2011 and is ongoing as of 2017.

In total, JoJo’s Bizarre Adventure has over 100 volumes, and has received various anime, novel, and video game adaptations, with a 2017 live action film. It’s one of the longest continuously running manga, and is extremely popular in Japan.

JoJo’s Bizarre Adventure has a distinctive visual style that sets it apart from other anime. According to Hirohiko Araki, the style is inspired by, among other things, shading techniques in Western art, 1980s visuals, classical art, and sculpture. Araki particularly uses color deliberately to create feelings of power. He also tends to draw very muscular characters. Fans often reference this aspect of the show for comparisons.

“I still think Killua's dad kinda looks like he belongs in Jojo's Bizarre Adventure.”
@HappyKuroKitty Twitter (May 13, 2017)
“sex is like jojo’s bizarre adventure. you get into lots of weird positions. you shout a lot. your family gets cursed. dio is there”
tosakahiyoko Tumblr (November 8, 2016)
“We’ve already seen a trailer for the live-action Jojo’s Bizarre Adventure movie. We’ve seen the outfits. We know what they look like. But what people really want to see are the Stands.”
Brian Ashcraft, “People Want To See Live-Action Jojo's Bizarre Adventure Stands,” Kotaku (April 27, 2017)
SEE MORE EXAMPLES

JoJo’s Bizarre Adventure has inspired a number of memes throughout its years. One example is Stand Cries. Some characters in JoJo’s Bizzare Adventure have the ability to use supernatural powers known as Stands. These powers are sometimes accompanied by battle cries, two of which are ORA ORA ORA and MUDA MUDA MUDA, and these cries have been considerably parodied. WRYYYY, another battle cry, was also the subject of a meme. Its use of dramatic poses has also led to JoJo’s Pose, in which fans imitate iconic postures from the series. Many lines from the series, especially poorly translated ones, have become minor memes as well.