What does khaleesi mean?

Khaleesi is a title given to the wife of a Dothraki warlord in the universe of the George R. R. Martin’s series A Song of Ice and Fire, popularly known as Game of Thrones after the name of the first book in the series and the television adaptation. It is roughly equivalent to “queen.”

Where does khaleesi come from? 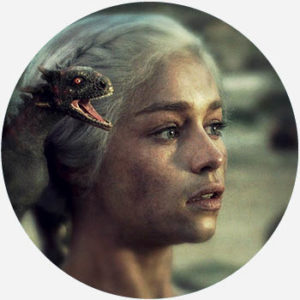 The word Khaleesi was invented by fantasy author, George R. R. Martin, for his novel A Game of Thrones, published in 1996. The word is from the fictional language of the Dothraki people. In their society, the khal is the warlord of a given clan (khalasar), and his wife is given the title of khaleesi.

In Martin’s universe, the character Daenerys Targaryen redefines what it means to be a khaleesi. Typically, when a khal dies, his wife no longer rules. Instead, her people abandon her and send her away. However, when Daenerys Targaryen’s khal, Drogo, dies, she stays in power of her clan and goes on to conquer surrounding lands. For Daenerys, the khaleesi is no longer limited to mean “wife of a khal.” Instead, she elevates it to a title of respect and power in its own right.

“Take charge of your own journey own that khalasar and be a khaleesi no one else can undermined #Positivity #GirlsRock #SpreadLove”
NeverFeelAshamed @JhasArrived Twitter (April 8, 2017)
“And I’m most grateful of all for my wise and beauteous khaleesi, Anne Nolan. Where would I be without you?”
Tim Folger, “Foreword,” The Best American Science and Nature Writing 2014 Deborah Blum, Tim Folger (2014)
“When I wore these clothes onstage I felt like Khaleesi...I had an extra suit of armor. It was so much deeper than any brand name.”
Beyoncé, reported by Paul Chi, “Beyoncé Compares Herself to Khaleesi While Pulling a Total Beyoncé at the C.F.D.A. Awards,” Vanity Fair (June 7, 2016)
SEE MORE EXAMPLES

One common use of khaleesi for fans of the show and novels is as a title to indicate someone exceptional or to motivate oneself, much in the way that queen can signal various powerful and virtuous qualities. You could, for instance, say that someone was your khaleesi, or encourage them to act like a khaleesi.

Since Daenerys Targaryen is by far the most prominent khaleesi in Game of Thrones, Khaleesi as a proper noun usually refers to her. Indeed, for some, it’s become interchangeable with her name. Some fans object to this, since in the series it’s only used as a title.

Another point of controversy is the word’s pronunciation. On the show, it’s pronounced ka-LEE-see, with a stressed, long e sound in the second syllable and the stress on the second syllable. However, David J. Peterson, the linguist responsible for turning Dothraki into a full-fledged constructed language, or conlang, prefers the pronunciation KHAH-ley-see, with the stress on the first syllable and a long a sound in the second.

Although it’s far from common, Khaleesi is also gaining steam as a baby name. The Social Security Administration recorded 146 babies named Khaleesi in 2012, and the baby name website Nameberry listed it as the 816th most popular name on its site in 2015.

This is not meant to be a formal definition of khaleesi like most terms we define on Dictionary.com, but is rather an informal word summary that hopefully touches upon the key aspects of the meaning and usage of khaleesi that will help our users expand their word mastery.