Moana is a fictional Disney character in the 2016 film of the same name. Moana is especially notable as Disney’s first Pacific Islander heroine.

As is the case with most Disney movies, the soundtrack featured catchy, empowering songs that become earworms for even those who haven’t seen the film.

Where does Moana come from? 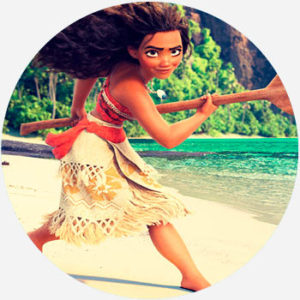 Moana is the protagonist of the eponymous film released in 2016 by Walt Disney Pictures. Directed by Ron Clements and John Musker, the film follows the teenage Moana as she goes through ancient Polynesia on a quest to protect her island from an incoming curse incurred by a demigod. The character was voiced by Auli’i Carvalho, herself of native Hawaiian descent. On her quest, she is accompanied by a easily distracted, accident-prone, and (to be honest) dumb rooster sidekick named HeiHei who provides some slapstick comedic relief.

Moana has long black hair, is of a more muscular build than most of Disney’s female characters, wears a variation of traditional Polynesian dress, and boasts a daring and strong-willed personality. Her name means “ocean” in Hawaiian and other Polynesian languages.

Upon the film’s release, Moana was praised for being an independent heroine, serving as a role model for young girls. Among many Pacific Islanders, she is regarded as an important step in representation of their culture and people. Others are more critical, citing the mishmash of Polynesian cultures represented in the film as careless and stereotypical.

What about Moana? She gave creation to the Fire God and turned the world green.
@esc440, March, 2018
Moana, on the other hand, digs deep to find the spunky confidence to take on the most fearsome of enemies: Ships of marauding pirate coconuts, a giant lava monster, and most of all her own self-doubt.
Jen Yamato, The Daily Beast, November, 2016
If my insanely white child wants to dress up as Moana, that should be fine. Moana is a powerful, independent, and fearless leader of her people. Going as Moana for Halloween is about vocalizing a connection to an amazing character; it is not about trying to appropriate another culture.
Laurel Niedospial, PopSugar, October, 2017
SEE MORE EXAMPLES

Marketed toward children, Moana‘s likeness appears on many different types of merchandise. There are dolls, clothing, costumes, and other items all relating to the character. During Halloween in 2017, Moana was a very popular Halloween costume among children. Cultural appropriation, however, became a popular topic of conversation among parents wondering if they should allow children who aren’t of Polynesian descent to dress up as Moana.

Moana is also popular among adults. Many publications hailed Moana as a feminist, a welcome addition to the other Disney princesses. Many cosplayers, or those who dress up for different kinds of conventions, created intricate costumes of Moana.

A meme was also created on the internet of a Moana doll with frazzled hair and large eyes, with users citing stressful situations that would cause them to look like the doll.

This is not meant to be a formal definition of Moana like most terms we define on Dictionary.com, but is rather an informal word summary that hopefully touches upon the key aspects of the meaning and usage of Moana that will help our users expand their word mastery.