Who is Mojo Jojo?

An evil genius monkey seeking world domination, Mojo Jojo is a recurring villain on the TV cartoon The Powerpuff Girls.

Where does Mojo Jojo come from? 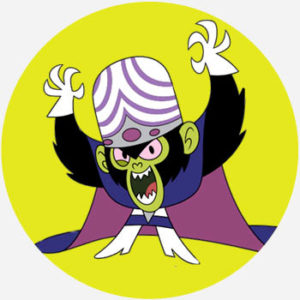 Mojo Jojo appeared on the first season of the Japanese-culture-influenced kids cartoon, The Powerpuff Girls, in 1998. On the show, Mojo Jojo was once just Jojo, a sweet-tempered monkey assistant to Professor Utonium—until the Professor accidentally spilled Chemical X while creating his three, super-powered Powerpuff Girls. After Jojo pushed the Professor aside to take the brunt of the spill, Chemical X caused Jojo’s genes to mutate, resulting in his characteristic green skin, exposed brain, genius-level intelligence, and revved-up name, Mojo Jojo. Feeling ignored and poorly treated, Mojo Jojo left the Professor and set up his own laboratory, from which he plots to defeat the Powerpuff Girls, destroy their home of Townsville, and rule the world.

Mojo Jojo‘s character design was inspired by monkey-headed Dr. Gori on the Japanese live-action series Spectreman. Another Japanese show, Kagestar, provided the inspiration for Mojo Jojo‘s distinctive white and purple-striped hat, which covers his exposed brain. As further (if not stereotyped) emphasis on his Japanese pop-culture roots, Mojo Jojo speaks with an exaggerated Japanese accent and is known for making repetitive and redundant statements, even distracting himself during fights with the Powerpuff Girls. He was voiced by actor Robert Jackson until the show ended in 2005, and he was brought on to voice him again when the show was rebooted in 2016.

you know that episode of the power puff girls when mojo jojo turns everyone in townsville into puppies?? i wish he’d come turn everyone here into puppies
@samilark_, March, 2018
*I plan to rule the planet* not to have my plan's plan to stop me The planner of you So stop Cease Desist I am your creator I am your king I am MOJO JOJO
@_EvilSinner, March, 2018
The Powerpuff Girls – The Emmy nominated series is back and kicking off a second season featuring all-new characters and specials, plus action-packed battles between the superhero sisters and fan-favorite villains HIM and Mojo Jojo.
Denise Petski, Deadline Hollywood, March, 2017
SEE MORE EXAMPLES

Mojo Jojo appears more than any other of the Powerpuff Girls’ opponents, making him very recognizable to the fans of the show and of cartoon animation. He is often referred to as the Girls’ main antagonist or archenemy, and he appears in the 2002 The Powerpuff Girls Movie as the main villain. One person even opened a bakery called Mojo Monkey Donuts in Minnesota, named for her three daughters’ fondness for the show.

Mojo Jojo is alluded to in comments on real and other fictional monkeys (cf., Planet of the Apes) as well as humorous attempts at world domination or other evil but harebrained schemes. He has inspired cosplay, fanfiction, and a popular meme: That’s The Evilest Thing I Can Imagine. Featuring Mojo Jojo joyfully crying, the meme (or GIF) is based on a quote of his from the TV show and is used to mock attempts at antagonism or unpleasantness on the internet. When someone writes or speaks in a way reminiscent of his repetition (“One shall be the number of Mojo Jojos in the world, and the number of Mojo Jojos in the world shall be one.”), they may be compared to Mojo Jojo or have some of his dialogue repeated back for humor by people familiar with the character.

The fictional monkey is not to be confused with Mojojojo, the stage name of an Indian musician and bassist.

This is not meant to be a formal definition of Mojo Jojo like most terms we define on Dictionary.com, but is rather an informal word summary that hopefully touches upon the key aspects of the meaning and usage of Mojo Jojo that will help our users expand their word mastery.