Who is Old Gregg?

Old Gregg is a character from the British TV comedy series, The Mighty Boosh. He’s a merman known for his “blinding mangina” and a love for Bailey’s, especially when it comes in a shoe.

Where does Old Gregg come from? 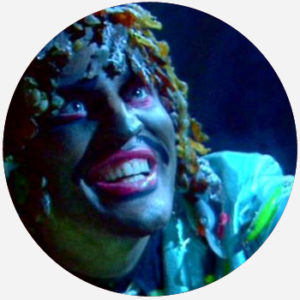 When he was first introduced, Old Gregg immediately interested fans. Since then, Old Gregg has had a significant cultural presence, likely due to the absurdity of the character and his many quotable lines, such as “I’m Old Gregg.”, “I got a mangina!”, and “You ever drunk Bailey’s from a shoe?”

the shape of water was just an old gregg fanfic don’t even TRY to lie to us del toro!!!
@jjbirde, January 2018
When Love Game by @ladygaga comes on my @Spotify, I immediately think of #OldGregg. I can’t be the only one. #PlayinLoveGamesWithMe
@PamelaHorton13, January 2018
And when people were posting three fictional characters that best described themselves, a viral meme circulated in which all three of someone's characters were Old Gregg.
Wendy, xoJane, October 2016
SEE MORE EXAMPLES

Old Gregg is a familiar allusion among fans of The Mighty Boosh, and his character is a popular source of quotes, especially “I’m Old Gregg.”

Because of his iconic look, featuring seaweed for hair, green skin, and a bright-pink tutu, Old Gregg is also a popular subject for cosplay or Halloween costumes. He is also the source of popular meme images and GIFs.

This is not meant to be a formal definition of Old Gregg like most terms we define on Dictionary.com, but is rather an informal word summary that hopefully touches upon the key aspects of the meaning and usage of Old Gregg that will help our users expand their word mastery.