What does Padawan mean?

A Padawan is a learner or apprentice. The term can refer specifically to a Jedi apprentice within the Star Wars universe. It can also be used more generally to refer to a trainee, a beginner, or an inexperienced person.

Where does Padawan come from? 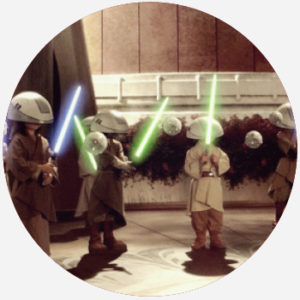 Padawan comes from the Star Wars franchise, and was coined by creator George Lucas. Padawan was not used in the original Star Wars trilogy; it was first introduced in 1999 prequel The Phantom Menace.

Padawans, sometimes referred to as Padawan learners or apprentices, belong to the order of the Jedi, which is a peacekeeping organization known for their monastic lifestyle and their ability to harness the energy of the Force. Jedi Padawans are paired with more experienced Jedi, who train them in the ways of their order.

Extending the allusion, Star Wars fans adopted Padawan for any young or inexperienced person by the early 2000s, a use that has only become more popular over time.

“With @hickeydave1 today showing him how to power flush. #padawan”
jimmy @JIrving13 Twitter (March 27, 2017)
“We've only just begun.... at karaoke. And my padawan is killing it at blackjack, too!”
Kristi Johnstone Collier Facebook (January 25, 2017)
“oh no a random person insulted me i better go cry in a corner. You have much to learn my padawan”
@CloTsbY Twitter (March 17, 2017)
SEE MORE EXAMPLES

Padawan, often lowercased, can be used derisively when it refers to someone who doesn’t know something or who lacks experience. In this sense, it’s sometimes used on social media to taunt another person in disagreements. However, Padawan can also be used affectionately for someone in training or learning something new.

A Padawan can also describe a new Star Wars fan. For example, the podcast Project Padawan refers to itself as “A Star Wars Fan Podcast for the Beginner.”

A related term Padawan braid, refers to the distinctive braids Star Wars Padawans wear during the period of their apprenticeship. Beyond the Star Wars universe, a small braid worn to one side is sometimes called a padawan braid after this style.

Padawan, à la young grasshopper, is often found in the context of the phrase “You have much to learn, young Padawan.” This is used in retort to questions from someone new to an activity or field, or to comments considered naive.

Padawan, as a Star Wars term, is not to be confused with Padawan Municipality in Sarawak, Malaysia. This is a district of the city of Kuching. The Star Wars term was not drawn from it.

This is not meant to be a formal definition of Padawan like most terms we define on Dictionary.com, but is rather an informal word summary that hopefully touches upon the key aspects of the meaning and usage of Padawan that will help our users expand their word mastery.