Where does Ponyboy come from? 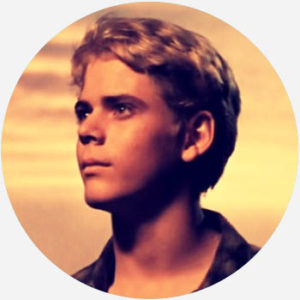 Author S.E. Hinton wrote The Outsiders in her teens, inspired by the gang violence at her high school in Oklahoma. As her narrator, Ponyboy becomes the most familiar character to the reader—and remains emblematic of the book and its themes. His real name is Ponyboy, making him even more distinctive and memorable. A teenage orphan and member of the working-class gang the Greasers, Ponyboy goes on a journey of sobering experience that helps him mature as a person.

Ponyboy’s coming-of-age is represented by perhaps the most famous quote from the book: “Stay gold, Ponyboy. Stay gold.” Spoken to Ponyboy by a dying friend, the quote is a reference to a line in a Robert Frost poem the boys read together, “nothing gold can stay,” transformed into “stay gold” as a reminder for Ponyboy to hold onto his moral courage and personal strength. “Stay gold, Ponyboy” has since become a meme in the 2000s, and variations are still a popular reference in art and commercial design.

My hair is SO BLONDE SHE DID THE ROOTS TOO I FEEL LIKE PONYBOY
@redtail, March, 2018
Marsha Durant took a step back and inspected her ponyboy. He had to look exactly right. There must be no blemishes, no imperfections to mar the impression they would make together.
hall2226, "The Perfect Ride" (literotica.com), September, 2014
Life is messy, bruising, but also full of intoxicating adventures. Which might explain why I still love reading The Outsiders — a book that I first came to love as a kid — and why so many others are still reading it five decades after it was first published in 1967. Set in the 1960s, S.E. Hinton’s gritty coming-of-age story follows the greasers — narrator Ponyboy Curtis, his protective older brothers Sodapop and Darry, their skittish friend Johnny, arch-cool bad boy Dallas, and their other low-class gang pals — as they navigate teenage angst and class warfare in Tulsa, Oklahoma.
Brandon Tensley, Pacific Standard, April, 2017
SEE MORE EXAMPLES

Ponyboy Curtis is an enduring character who is well-known in pop culture. His name may be referenced in regard to film history, young-adult literature, or in discussion of gang violence and childhood tragedy. As the sympathetic and nostalgic hero of a coming-of-age story, artists and entrepreneurs have chosen Ponyboy as the name for songs, bars, and professional pseudonyms. The “Stay gold, Ponyboy” meme is used to express solidarity or comfort to a vulnerable person.

Ponyboy, it’s worth noting, is very occasionally used as a slang term for a young gay man.

This is not meant to be a formal definition of Ponyboy like most terms we define on Dictionary.com, but is rather an informal word summary that hopefully touches upon the key aspects of the meaning and usage of Ponyboy that will help our users expand their word mastery.