Who is Sid the Sloth?

One of the main characters of the Ice Age film franchise who generally provides comic relief, Sid the Sloth is a Megalonyx (prehistoric sloth) voiced by John Leguizamo.

Where does Sid the Sloth come from? 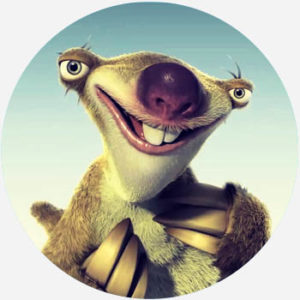 Sid the Sloth first appeared in the animated children’s movie Ice Age, produced by Blue Sky Studios in 2002. He is one of the three principal characters, alongside a wooly mammoth named Manny and a saber-toothed tiger, Diego. In the midst of the Ice Age, the trio of animals undertake a journey to return a human baby to his family, from whom he has been separated.

The Ice Age franchise now includes five films, the latest, Ice Age: Collision Course, released in 2016. Various animated shorts and television specials have also featured the misfit prehistoric trio. In them, Sid, Manny, and Diego continue their adventures, finding mates, escaping other animals and dinosaurs, and traveling across the Earth (and outer space!).

Sid the Sloth is based on modern three-toed sloths and the extinct ground sloths (Megalonyxs). His origins involve abandonment by the rest of his family, which led to a solitary life before the beginning of Ice Age. He is a comedic character, who speaks with a lisp, is often silly or dim-witted, and humorously hurts himself. However, he is also caring and loyal, which makes him endearing to his animal companions. Throughout the Ice Age films, Sid exhibits parental behavior by caring for young creatures of various species. He eventually mates with Brooke, a female sloth.

Sid the Sloth has also become a meme, usually featuring one of his bizarre facial expressions or using an image of Sid as a reaction image. His line “Doesn’t anyone love me? Doesn’t anyone care about Sid the Sloth?!” is often quoted and parodied.

Examples of Sid the Sloth

Today, my wife compared me to Sid the sloth from Ice Age. Same smile, same eyes, same belly, same big feet. FML.
faceless_sailor8, FMyLife, August, 2011
...Y'all remember Sid the sloth from Ice Age. He's got a song called The Sid Shuffle The Continental Drift and in the video they have people from all over the world doing it. Sid was too lit and they producers went ham on the beat
@RacquelBethea, January, 2018
With Ice Age movies, the first of which came out in 2002, the primary pop-culture association shifted to an actual sloth — a prehistoric ground sloth named Sid. Voiced by John Leguizamo, he is one of the franchise’s central characters, but he’s not very huggable.
Lily Rothman, TIME, March, 2013
SEE MORE EXAMPLES

Who uses Sid the Sloth?

As a main character in a successful children’s movie franchise, Sid the Sloth is well-known to young children and their families. He is also a popular reference on the internet, due to his comedic lines and strange appearance.

His silly demeanor, characteristic lisp and clumsiness, and distinctive design (a wide head with protruding eyes atop a long, thin neck and pudgy body) often means that an image of him is used as a reaction post in the vein of “Duh!” or “Don’t be so stupid!”. His image is also compared to items, people, or animals who look similar to him.

This is not meant to be a formal definition of Sid the Sloth like most terms we define on Dictionary.com, but is rather an informal word summary that hopefully touches upon the key aspects of the meaning and usage of Sid the Sloth that will help our users expand their word mastery.