Who is Simple Jack?

Simple Jack is a fictional character with intellectual disabilities within the comedy film Tropic Thunder.

Where does Simple Jack come from? 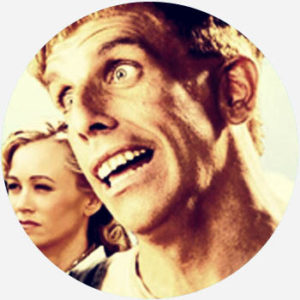 Further mocking his simplemindedness, Simple Jack has a peculiar appearance, including a prominent overbite and ragged bowl haircut.

The character and fictional film were apparently meant to parody other famous portrayals of persons with disabilities, such as Sean Penn in 2001’s I Am Sam or Cuba Gooding Jr. in 2003’s Radio.

Cat on me, remote out of reach, forced to watch SIMPLE JACK... er, I mean, RADIO.
@Kza, September 2008
This barber that I never go to fucked all my hair up and now I look like simple jack from tropic thunder
@BrvndxnNvchbvr, April 2018
Harold emerged from the lake Ward had dumped his body in and then staggered off towards the city. His mind seemed to be rebooting itself slowly so he spent the first portion of the episode acting remarkably similar to Ben Stiller’s “Simple Jack” character from Tropic Thunder.
Jim Vejvoda, IGN, March 2017
SEE MORE EXAMPLES

Shortly after the release of Tropic Thunder, viewers began to compare people or things to the character. Tweets from 2008 describe haircuts as resembling Simple Jack‘s and liken things seen as slow or stupid to him, including the Toyota Prius and Apple’s Genius music recommendation service.

Outside of such topical comparisons and contemporary allusions to the character, Simple Jack is mainly discussed as part of the controversy it called.

The Simple Jack plotline and marketing materials related to it were criticized by disability rights advocates. Prior to the release of Tropic Thunder, its production studio, DreamWorks, created a trailer, promotional website, and poster for its film-within-the-film Simple Jack. The poster featured the tagline “Once upon a time…there was a retard.”

In response to the use of retard and the depiction of the Simple Jack character, disability advocacy groups, including the Special Olympics and the American Association of People with Disabilities, called for a boycott of Tropic Thunder. DreamWorks took down the trailer and promotional website and then met with the groups.

A Tropic Thunder writer argued that the goal of Simple Jack was not to belittle people with disabilities but rather actors who “clumsily and terribly” portray those roles in easy bids for critical acclaim.

This is not meant to be a formal definition of Simple Jack like most terms we define on Dictionary.com, but is rather an informal word summary that hopefully touches upon the key aspects of the meaning and usage of Simple Jack that will help our users expand their word mastery.