Who is Velma from Scooby-Doo?

Velma is a female, teenage detective character from the Scooby-Doo cartoon and films, popularly identified as a nerd and lesbian.

Where does Velma from Scooby-Doo come from? 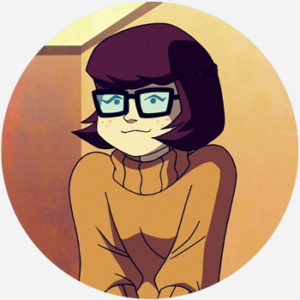 Velma was introduced as one of the protagonists of Scooby-Doo, Where Are You! in the show’s first episode, which aired in September, 1969. The original series ran for two seasons, but it went on to inspire numerous incarnations and spin-offs, totaling over 400 episodes and dozens of films.

Velma became known for a number of traits which are sometimes referenced in pop culture. She is portrayed as the smartest of the show’s protagonists and is often the one to solve an episode’s central mystery. She is also known for wearing an orange turtleneck sweater, black glasses, and knee-high socks. A running gag that started in the show’s first episode has Velma frequently losing her glasses.

Adult viewers (or adults who watched Scooby-Doo as children) have insinuated that Velma may be a lesbian. This idea has been played on in popular culture. In the 2001 comedy movie Jay and Silent Bob Strike Back, a Velma-like character in a dream sequence is implied to be a lesbian. James Gunn, the screenwriter of the live-action 2002 Scooby-Doo movie “nodded” to the idea in his script, but insinuations did not make the final cut.

Examples of Velma from Scooby-Doo

I take off my glasses for 2 seconds and I feel like Velma from scooby-doo when she crawls on the floor bc she can’t see
@Charleenmascot1, February, 2018
But amidst all the hype, there is one request from early fans of this new Scooby-Doo movie that we low-key hope takes effect: that they give Daphne and Velma a queer relationship.
Allie Gemmill, Teen Vogue, November, 2017
Some guy literally came to our table at the bar JUST to tell us that I look like Velma from scooby-doo It's been so many years, I changed my glasses and hairdo and threw that orange sweater away but STILL I'm so happy
@sachasanschat, February, 2018
SEE MORE EXAMPLES

Who uses Velma from Scooby-Doo?

People may compare themselves or others to Velma, with regard to her clothing, nearsightedness, or other deductive intelligence.

Some in the LGBT community have embraced Velma as a sort of lesbian icon. Alison Bechdel labeled a lingerie box “Velma’s Secret” in a 2008 edition of her comic strip Dykes to Watch Out For, apparently playing on Victoria’s Secret and Velma from Scooby-Doo.

Following the 2017 announcement of a movie about Velma and Daphne, the other female Scooby Doo protagonist, some fans have suggested that the two characters should have a romantic relationship in the film.