What does Bechdel test mean?

The Bechdel test is an informal way to evaluate bias against women in films and other media.

A work is said to pass the Bechdel test if it 1) has two (named) women, who 2) talk to each other about 3) something other than a man.

Where does Bechdel test come from? 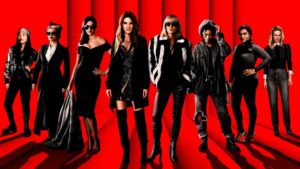 The Bechdel test aims to bring attention to and address gender inequality in media. It was created in 1985 by its namesake, cartoonist Alison Bechdel, and her friend Liz Wallace, hence it sometimes is called the Bechdel-Wallace test.

The principle first appeared in a 1985 strip in Bechdel’s comic Dykes To Watch Out For, which establishes its three-part rule: 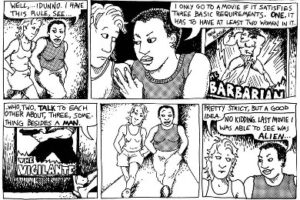 The principle was popularly referred to as the Bechdel test by 2007, around which it was receiving more mainstream coverage, such as in media critic Anita Sarkeesian’s popular YouTube video explaining the concept in 2009.

The website bechdeltest.com, which maintains a database of movies that pass or fail it, went live in 2013. Their statistics show that just under 58% of movies meet all three criteria of the Bechdel test. This indicates just how many films (notably, Pacific Rim in 2013) fail to represent women.

Increasingly nuanced discussions of the Bechdel test emerged in the late 2010s. A 2016 Guardian article took some issue with the test, as a film like Gravity (2016) technically fails it but centers on one strong woman while The Twilight Saga (2008–12) passes though its female characters aren’t fully realized on their own terms.

Criticism aside, the Bechdel test remains a useful and general way to gauge the representation of women in media.

Just a reminder that only 10 of the 21 Marvel films pass the Bechdel test. Captain Marvel is great, but we need to do better. Bechdel test: two women, talking to each other, about something besides a man.
@itsashlyperez, March, 2019
... 11 films passed the $1 billion revenue mark—and all 11 of them passed the Bechdel Test. Some of those movies were Star Wars: The Force Awakens (way to turn it around, Star Wars!), Beauty and the Beast, and Zootopia. So it seems that it’s good for business to treat women like human beings. Who. Would. Have. Thought.
Cady Drell, Marie Claire, December, 2018 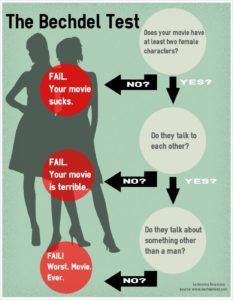 The Bechdel test is used in media and gender studies as well in more mainstream discussion of the representation of women in media.

While the test is commonly applied to films, it has also been notably applied to video games, comics, literature, and even science journalism (Finkbeiner test).

@NadiaKamil It is a video game that passes MULTIPLE DAVIN TESTS, including the Bechdel test and the "I don't shoot anyone" test.

Spinoff versions of the test have been created to measure the representation of sexuality and people of color, such as the Vito Russo test and DuVernay test, respectively.

Proud to say that aside from our inclusivity in front of & behind the camera, @onedayatatime passes the Bechdel test, Mako Mori test, Sphinx test, Vito Russo test, Sexy lamp test & DuVernay test. All take into account inclusivity in storytelling. Look 'em up! Be inspired!

While the Bechdel test is generally seen as useful, there are still criticisms.

One is that the Bechdel test doesn’t account for quality or circumstance of the work (a film set in a monastery would not pass, for instance). It also fails to account for the lack of opportunity or participation of women in media industries that can lead to their underrepresentation or bias against them.

Solid thread, sir. My little tip: Be sure and search for diverse talent when hiring your writing team. A room with women in it is far less likely to draft a story that fails the Bechdel test; include writers of colour and you'll be rewarded with richer and more inclusive stories.

This is not meant to be a formal definition of Bechdel test like most terms we define on Dictionary.com, but is rather an informal word summary that hopefully touches upon the key aspects of the meaning and usage of Bechdel test that will help our users expand their word mastery.