What does white feminism mean?

White feminism is the label given to feminist efforts and actions that uplift white women but that exclude or otherwise fail to address issues faced by minority groups, especially women of color and LGBTQ women.

Where does white feminism come from? 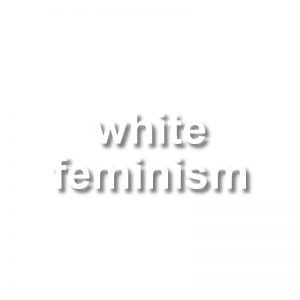 A white woman might epitomize white feminism when she matter-of-factly tells a Muslim woman that she’s being oppressed by her religion, or when she dismisses the concerns expressed by a black woman. It tends to describe a brand of feminism largely practiced by white women that, while supportive of feminist ideals, might ignore the plight of minority or lesser privileged groups within the feminist movement.

The first two waves of feminism (the first dealing with suffrage, the second fighting for increased equality on all fronts) have been considered examples of white feminism: They largely excluded women of color and LGBTQ women.

The phrase white feminism was used as early as 1986 in Paula Gunn Allen’s text Who is Your Mother? Red Roots of White Feminism. It continued to be used throughout the third wave of feminism (concerned with diversity, identity, and intersectionality)  beginning in the 1990s. Writers like bell hooks notably wrote about the struggles faced by excluded groups, challenging white feminism.

White feminism experienced a major uptick in 2016–17, especially during the 2017 Women’s March protesting Donald Trump’s presidency. Critics felt that many of its organizers and marchers, while well-intentioned, overlooked or undervalued the concerns of marginalized communities–concerns based on race, gender identity, and sexual orientation.

On the 3rd anniversary of the #WomensMarch I realize that @MsPeoples looks like she is from the future.

black trans women: *get killed at an alarming and terrifying rate* / white feminism: [blank] /black ppl: *get police called on them & sometimes killed for existing* / white feminism: something that directly impacts white women some way: *happens* / white feminism: PUSSY HATS, EVERYONE!!
@brokeymcpoverty, January 2019
When the Weinstein story broke, actress Rose McGowan became one of the most outspoken and celebrated champions for survivors of sexual violence. Then, in what she claims was a marijuana-induced “stupidity lapse,” she suggested that being called a woman was as bad as being called the n-word. This is white feminism at work. Using hate speech in a casual comparison is not only lazy and offensive, it trivializes the experiences of the women who it’s targeted at.
Tayo Bero, Flare, December 2017

White feminism is the LaCroix of social movements. No substance.

The counter-weight to white feminism is intersectional feminism, which calls for total inclusion of different types of women within the feminist movement.

During the late 2010s, many think pieces were published about celebrities who were thought of as white feminists. Taylor Swift, Lena Dunham, and Miley Cyrus faced heavy criticism for their attacks on, tokenizing of, or cultural appropriation from women of color and queer women.

Condemnation of “academic feminism” or what today we would call white feminism: feminism reliant on and benefiting from capitalist patriarchy at the expense of marginalized women.

This is not meant to be a formal definition of white feminism like most terms we define on Dictionary.com, but is rather an informal word summary that hopefully touches upon the key aspects of the meaning and usage of white feminism that will help our users expand their word mastery.