“In an age when individual freedom is all, it comes as something of a shock to reflect that in the world's most prosperous and dynamic country the prohibition of alcohol lasted for almost 14 years. Today we often think of Prohibition as a deluded experiment, instinctively associating it with images of Al Capone, the mafia, and the Valentine's Day Massacre. In fact, the campaign to prohibit alcohol had been deeply rooted in Anglo-American society for some two centuries.”
Dominic Sandbrook, “How Prohibition backfired and gave America an era of gangsters and speakeasies,” The Guardian (August 25, 2012)
“When the 21st Amendment was ratified on this day, Dec. 5, in 1933, it ended Prohibition 13 years, 10 months, and 19 days after it began.”
Jennifer Latson, “A Toast to the End of Prohibition,” TIME (December 5, 2014)
“The Prohibition Party, as it was called, never became a major electoral force. But in 1919, exactly half a century after the Party’s founding, the Eighteenth Amendment to the Constitution was ratified, banning ‘the manufacture, sale, or transportation of intoxicating liquors.’”
Kelefa Sanneh, “Drunk with Power: What was Prohibition really about?” The New Yorker (December 21, 2015)

Where does Prohibition come from? 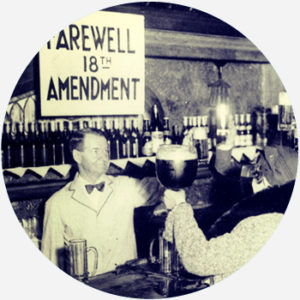 Anti-alcohol advocacy, formally called the temperance movement, was popular in the United States in the early 19th century. Largely created and run by religious women, the temperance movement was a response to the perceived role that alcoholism and drunkenness played in creating crime, poverty, and trouble among families. The movement grew through the 19th century, gaining footholds in traditionally Protestant areas like New England, until 1920, when the 18th Amendment (which is often called Prohibition and was enforced through the Volstead Act) was officially signed into federal law.

Many Americans disagreed with Prohibition, and mostly ignored the laws and restrictions. While alcohol consumption did fall as a result of liquor becoming more difficult to obtain, Prohibition also spawned a new area of organized crime in which bootlegging (making, transporting, and selling alcohol illegally) rose in popularity. This business could be carried out locally, but it was largely controlled by the mob, who created a national bootlegging network. Famed gangster Al Capone made $60 million every year from his bootlegging exploits. Many people also made their own alcohol from scratch, creating homemade beer or moonshine.

Prohibition was eventually repealed in 1933, amidst the Great Depression. President Franklin D. Roosevelt saw the possibilities in creating an influx of jobs through reviving the liquor industry, and actually campaigned on a platform that involved repealing Prohibition. Roosevelt easily won the election and repealed Prohibition, to much celebration.