What does Salem witch trials mean?

The Salem witch trials consisted of investigations, trials, and executions of alleged witches in colonial Massachusetts from 1692–93.

“There's so much victim-shaming. When a woman says they were assaulted, a lot of people's first reaction is to say 'No you weren't. What was the situation?' They treat it like the Salem Witch Trials.”
Amy Schumer, reported by Daniel Kreps, “Amy Schumer: Rape Victim-Shaming Like 'Salem Witch Trials',” Rolling Stone (August 19, 2016)
“She borrowed the conservative dress meant to both repress and protect women from the Puritans, the persecution of rebellious women from the Salem Witch Trials, the restriction on abortion from Nazi Germany and the notion of ‘handmaids’ providing children for barren mistresses from the Bible.”
Eliana Dockterman, “Margaret Atwood Doesn’t Hear Complaints That the Handmaid’s Tale Is Unrealistic Anymore,” People (April 20, 2017)
“Like most Americans, Tim Adriance always thought that the Salem witch trials were just something that happened to other people.”
Bill Ervolino, “Bergen County historian finds distant relative was hanged during Salem witch trials,” The Record (October 24, 2016)
SEE MORE EXAMPLES

Where does Salem witch trials come from? 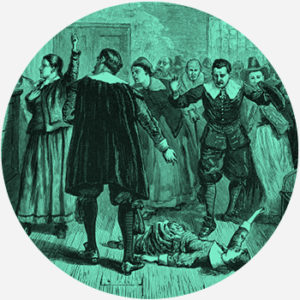 The Salem witch trials largely took place in Salem Village (present-day Danvers) in the Massachusetts Bay Colony. The village was wracked with social stresses, such as a recent smallpox epidemic, rivalries with the nearby Salem Town (now Salem), war, and the displaced refugees created by it. This all contributed to an atmosphere of tension and suspicion.

Salem Village’s new minister Samuel Parris didn’t help relieve the town’s tensions. He arrived in 1689, and because he was seen as strict and money-loving, made many enemies. The uneasy state of Salem Village began to intensify after his nine-year-old daughter Elizabeth and his 11-year-old niece Abigail Williams started having fits. Their friend Ann Putnam, who was 11, experienced similar symptoms. Unable to identify the cause, the local doctor suggested the fits might be supernatural.

The girls blamed the Parris’s slave Tituba for the fits. They also pointed fingers at Sarah Good and Sarah Osborn, two women in the community who were neither well-respected nor powerful. Under intense questioning, Tituba admitted to having made a deal with the devil and claimed to have seen Good and Osborn’s names among a list of those who had done the same. More girls started having fits and identifying potential witches.

The town’s government responded by creating a Special Court of Oyer (hear) and Terminer (decide). Chief Justice William Stoughton presided over a committee of magistrates and jurors. Bridget Bishop of Salem was the first defendant, and she was found guilty of practicing witchcraft and was executed on June 10, 1692.

The defendants were not permitted counsel. Alleged victims’ testimony that they had seen and been attacked by the specters of accused witches was considered admissible “spectral evidence.” All in all, 19 people (14 of which were women) would be hanged, one man would be crushed death, and several others died in prison.

The Superior Court of Judicature took over in October of 1692. It didn’t allow “spectral evidence.” Finding a lack of other evidence, it pardoned and released the remaining suspects, thereby ending the trials. Victims and their families would later be granted restitutions and apologies.

The Salem witch trials, along with the phrase witch hunt, are often used as a metaphor for unfair persecution or mass hysteria. This metaphor was extended the 1953 Arthur Miller play The Crucible, which used the Salem witch trials as an allegory for Senator Joseph McCarthy’s prosecution of alleged communists at the time.

This is not meant to be a formal definition of Salem witch trials like most terms we define on Dictionary.com, but is rather an informal word summary that hopefully touches upon the key aspects of the meaning and usage of Salem witch trials that will help our users expand their word mastery.