What does Treaty of Versailles mean?

The Treaty of Versailles was the 1919 peace treaty that officially ended the conflict between Germany and the Allied Powers during World War I.

Where does Treaty of Versailles come from? 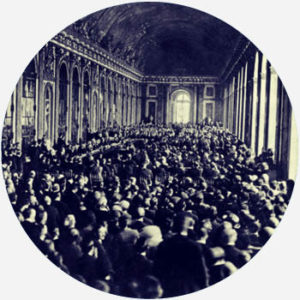 On June 28, 1919, World War I ended with the signing of the Treaty of Versailles, so named because it was signed inside the historic Palace of Versailles outside Paris, France.

After four years of grueling warfare at the cost of tens of millions of lives, Germany requested President Woodrow Wilson negotiate an armistice in 1918 based on his Fourteen Points. The Fourteen Points were Wilson’s vision for how to settle geographical, economic, and political affairs in Europe after World War I. It concerned the de-occupation of many of the nations Germany had invaded during the course of the war and proposed the formation of an association of nations to help keep peace in the future.

The Treaty of Versailles was drafted at the Paris Peace Conference in 1919. The four major voices in the negotiation were the United Kingdom, France, and Italy, three of the Allied Powers, and the United States, an Associated Power of the Allies. Germany, and the rest of the defeated Central Powers, were not invited to the conference, nor was Russia, which had previously withdrawn from the war after its Bolshevik Revolution.

When the treaty was presented to the Germans, it differed significantly from the Fourteen Points, as the United Kingdom and France sought stiff measures against Germany. The treaty required Germany to cede about 10% of the territory it had before the war in addition to conquered territories, and severely restricted the German army and the country’s manufacture of armaments. The “War Guilt” clause also required Germany to accept responsibility as the aggressor in the war and pay reparations equaling roughly $33 billion US dollars. The treaty also created the League of Nations, which Germany couldn’t join until 1926.

Unsurprisingly, Germany protested what they felt was harsh treatment and only signed the treaty under protest. After fierce debate, the US Senate rejected it, the first time they’d ever chosen not to ratify a peace treaty. Instead, Congress negotiated a separate agreement in 1921. These agreements didn’t include the League of Nations, which Senate opponents felt ceded too much power from the US and which the US would never join.

For five years after the war, the treaty was enforced strictly, particularly by France and Belgium. In 1924, new agreements softened the terms of the treaty. The Great Depression hit Germany hard, so in 1932 reparations were cancelled. In 1935, Hitler denounced the treaty, whose severe impact on Germany many think contributed to his rise, and began work to undermine it. In 1939, World War II began, thus overturning the peace that the Treaty of Versailles had intended to maintain.

Examples of Treaty of Versailles

“ESPN's Cassidy Hubbarth breathlessly introduced the team representatives for the NBA Lottery Show on Tuesday night. You'd have thought she was announcing the dignitaries to sign the Treaty of Versailles.”
Berry Tramel, “Time to scrap the NBA lottery,” The Oklahoman (May 17, 2017)
“Now take a longer view of Senate history—you can get the CliffsNotes version from the Senate website—or dive into any number of books or scholarly papers on the issue and the epic filibusters around the Treaty of Versailles or the Civil Rights Act.”
Z. Byron Wolf, “The Senate's minority party has been losing its power for 100 years. It won't stop now.” CNN Politics (May 2, 2017)
“Watching Donald Trump on the world stage must be surreal for the academics, politicians, diplomats and soldiers of the foreign-policy establishment. They haven’t been this alarmed since the Senate failed to ratify the Treaty of Versailles.”
Walter Russell Mead, “A Debate on America’s Role—25 Years Late,” The Wall Street Journal (May 22, 2017)
SEE MORE EXAMPLES