Feedback
Previous "Climactic" vs. "Climatic" Next “Antibiotic” vs. “Abiotic” vs. “Antibody”: What Is The Difference?

Update: Voting in the Final Four has ended! Check out the championship round!

It’s time to vote on round five of our slang competition at Dictionary.com!

After four intense rounds of competition, our March Madness slang bracket has been narrowed down to the Final Four: Karen, OK boomer, low-key, and the struggle is real.

The remaining four words in our contest represent an intriguing mix of old and new slang. Karen and OK boomer both rose to popularity toward the end of the 2010s. Meanwhile, the struggle is real was popularized by Tupac’s 2002 posthumous track, “Fame,” and low-key came on the scene near the end of the 2000s.

Will the ultimate winner be a term we’ve known and loved for a decade, or will it be a newer slang word that takes the crown? It’s up to you to tell us!

This week, we’re asking you to vote on Dictionary.com’s Final Four by choosing your favorite word in each of the pairings in the poll below. 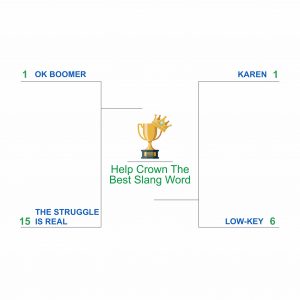 Simply click on your pick for each of the head-to-head contests in the poll. The words that get the highest number of votes will advance next week to face off against one another in our championship round!

Previous "Climactic" vs. "Climatic" Next “Antibiotic” vs. “Abiotic” vs. “Antibody”: What Is The Difference?
RELATED POSTS