What does ancient aliens mean?

The ancient aliens meme features a still image from the television show of the same name. This picture of host Giorgio A. Tsoukalos is then paired with text about aliens as the cause of whatever is the topic of discussion, however unlikely that may be.

Where does ancient aliens come from? 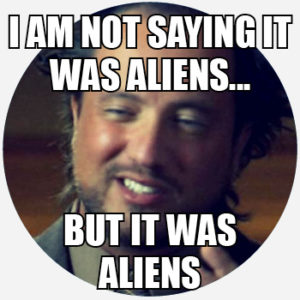 The television show Ancient Aliens started airing in April 2010. The show has serious critics who point to its problematic practice of presenting completely fabricated, far-fetched stories as history.

The first spike in lookups for “ancient aliens meme” was in early 2011, though references started cropping up as early as November 2010. The ancient aliens meme itself is an image macro that depicts Giorgio A. Tsoukalos with his arms outstretched and hands cupped slightly, captioned with a humorous phrase insisting some unexplained phenomena was the work of aliens or some other supernatural being. It is usually posted in response to some unexplainable phenomena. It could also be posted in reference to something perfectly explainable, but with the unlikely insistence that it was aliens who were responsible.

Over time, ancient aliens has evolved to include many variations. A popular version is the image overlaid with the text “I’m not saying it was aliens… but it was aliens,” or the more simplistic version that has just “ALIENS”; the meme is well-known enough that the rest of the context can be inferred. There is also a version with no text, just the image of Tsoukalos mid-sentence where “ALIENS” is implied. There is yet another variation that includes the original image and is paired with words that have nothing to do with the topic of aliens, but is rather mimicking the tone of conviction used by Tsoukalos to present unfounded far-fetched pseudo-logic as fact.

“Awesome picture. But who really took that picture? Could it be....... lol’ [ancient aliens image macro]
@Iservedrinks, January, 2017
That ancient aliens show is on in the break room I didn't know it was real, I thought it was just a meme
@TeamSkullTHG, October, 2016
if u wanna know what i'm thinking of, usually it's the ancient aliens meme only it says 'gender' or 'capitalism'
@joseph_dye, November, 2016
SEE MORE EXAMPLES

People use the meme to poke fun at the show, and specifically Giorgio A. Tsoukalos, though Tsoukalos has said in interviews that he loves the meme and finds it funny.

People use the term ancient aliens when referring to the meme or the show.

This is not meant to be a formal definition of ancient aliens like most terms we define on Dictionary.com, but is rather an informal word summary that hopefully touches upon the key aspects of the meaning and usage of ancient aliens that will help our users expand their word mastery.