What does and I oop mean?

Where does and I oop come from? 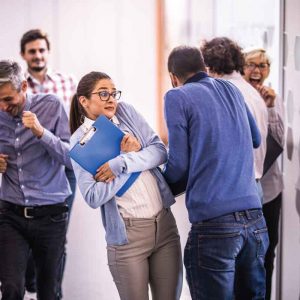 And I oop originated with a YouTube video by the drag queen Jasmine Masters in October 2015. Masters made a name for herself by competing on the popular reality TV show Ru Paul’s Drag Race.

In the YouTube video, Masters complains about friends who can’t handle their alcohol. At one point, she suddenly interrupts herself, with a pained expression: “And I oop!” After a long pause, she says, “I just hit my balls.” Oop, like oops and ope, is a in interjection conveying such emotions as surprise or acknowledging a mistake.

The video and phrase went viral in March 2019 on Twitter. User @cherryemoticon used a clip of Masters saying And I oop as a reaction to the comment: “When you’re telling your parents a crazy story and you almost snitch on yourself.”

Examples of and I oop

“AND I OOP” is literally the perfect response to EVERYTHING!!😂 it’s CRAZZZZYYYYYYY
@lifeofrickey, May 2019
if you’re dating a VSCO girl you’re single to me. what’s Kelsey gonna do to me, throw her hydroflask at me? and i oop me? sksksksk me?
@vivinguyens, September 2019
However, there's one line in particular which fans are shook by. In the second verse, Camila adds: "You say we're just friends // But friends don't know the way you taste". And I oop. Shawn and Camila are just friends IRL but the line is a great tongue and cheek reference to the dating rumours which have surrounded them since they first collaborated.
Sam Prance, PopBuzz, June 2019
SEE MORE EXAMPLES

Who uses and I oop?

After @cherryemoticon posted the clip, and I oop became a meme, with users posting the phrase of Masters’s video clip to humorously represent a moment of shock and surprise at a mistake, often ironic in nature.

daenerys when she kissed jon snow and felt something in her chestpic.twitter.com/9emi70Wu2f

In summer 2019, and I oop become associated as an catchphrase of VSCO girls. A VSCO girl is a term, generally used as an insult, for a young, usually white woman who posts trendy pictures of herself edited on the app VSCO. Apparently, VSCO girls were perceived to overuse and I oop as a cutesy-seeming acknowledgement of slip-ups in their videos.

14 year old girls when someone drops their water bottle and they respond with “sksksks and i oop” pic.twitter.com/6XGIE1goTh

This is not meant to be a formal definition of and I oop like most terms we define on Dictionary.com, but is rather an informal word summary that hopefully touches upon the key aspects of the meaning and usage of and I oop that will help our users expand their word mastery.