Feedback
Brian Peppers
But can it run Crysi...

What does burn meme mean?

Apply cold water to burned area is a meme and expression issued in response suggesting that one has been badly insulted, or “burned,” and will need cold water to recover.

Where does burn meme come from? 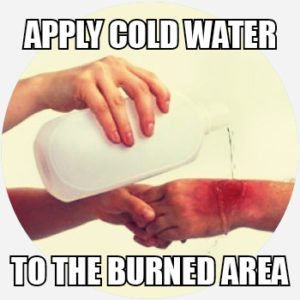 The apply cold water to burned area meme features, along with the text, an image of one person pouring cold water on another person’s visibly red, burned wrist. The meme takes literally the slang term burn, a “harsh and successful insult,” which dates back to at least the 1980s, in the exclamation Burn! This is issued in gloating triumph after a verbal attack. “Burn!” was popularized as the catchphrase of Kelso (Ashton Kutcher) on the late 1990s and early 2000s sitcom, That ’70s Show.

The burn meme appears to have originated on May 12, 2012 when, in response to a school disciplinary referral form, a user posted a photo with the comment: “Hope they remembered to pour some cool water on that burn.” Riffing on instructions one might encounter in an over-the-counter medical treatment, the expression imagines a person is so burned by an insult they will need to cold water to recover. It’s worth noting, though, that physicians suggest using cool, not cold water, for an actual burn.

The meme shortly after took off, used as a reaction to a range of cutting, witty, or silly insults and comebacks online. For instance, one notable version shows a screen capture of a short text message dialogue on an iPhone. The first text reads: “Every kiss begins with K….;)” a variant of the slogan from a popular jewelry store. The second answers: “Too bad ugly begins with U.” Below the screen capture, as humorous advice for the rejected flirter, is the burn treatment image with the text: “Apply cold water to the burned area.” Interest in the meme and phrase peaked on Google Trends in 2012 though continued to enjoy currency online in the following years.

The apply cold water to burned area meme is issued in response to particularly harsh or clever put-downs—or “sick burns”—directed at fellow internet users as well as celebrities, companies, and athletic teams. It has inspired some variations, such as apply cold mustard to the burn, swapping out the standard image of water for a container of mustard, or apply milk of poppy to the burned area, alluding to the Game of Thrones, featuring an image of the character Grand Maester Pycelle, who notably uses milk of poppy as a medical potion in the fantasy series. The meme’s catchphrase, apply cold water to burned area, has also become common enough to appear on its own without its familiar burn treatment image.

This is not meant to be a formal definition of burn meme like most terms we define on Dictionary.com, but is rather an informal word summary that hopefully touches upon the key aspects of the meaning and usage of burn meme that will help our users expand their word mastery.