Feedback
But can it run Crysi...
cash me outside

What does Call Me Maybe mean?

Call Me Maybe is a viral pop song by Carly Rae Jepsen that spawned many covers and parodies thanks to its upbeat, catchy tune and lyrics.

Despacito, Side to Side, Nyan Cat, Smells Like Teen Spirit, Let It Go

Where does Call Me Maybe come from? 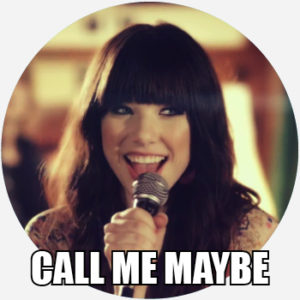 Call Me Maybe was co-written by Canadian pop star Carly Rae Jepsen, and songwriter Tavish Crowe. Jepsen reported that she expected they would edit her first-draft lyrics later, but Crowe convinced her to keep the song’s now-famous chorus: “Hey I just met you / And this is crazy / But here’s my number / So call me maybe.”

Who caught @carlyraejepsen in @RollingStone's 100 Greatest songs of the century (So Far) for 'Call Me Maybe'?! pic.twitter.com/ZXmAcEiKXV

The song, released in 2011, was initially confined mostly to Canada. Then mega pop star Justin Bieber returned home to Ontario for the holidays and happened to hear it on the radio. He tweeted “Call me maybe by Carly Rae Jepsen is possibly the catchiest song I’ve ever heard lol.” This brought the song to his over 18 million followers, and further increased the publicity by making a video with himself and some friends lip-synching to the song.

Thanks in large part to Bieber’s endorsement, Call Me Maybe became a smash hit in the United States in 2012. By June, it claimed the number one spot in the Hot 100, the first female-led song to get there in two years. It had also become an international success, reaching the top spot in 13 other countries, according to an MTV article from June 2012.

"Call Me Maybe” by Carly Rae Jepsen has reached 4 MILLION likes on YouTube. This is her first video to achieve this.
Congratulations, @carlyraejepsen! pic.twitter.com/MxG5vtZnZT

Examples of Call Me Maybe

Hey I just met you, and this is crazy, but the last time LeBron lost a first round playoff game people listened to Call Me Maybe.
@ChrisJOShea, April 24, 2017 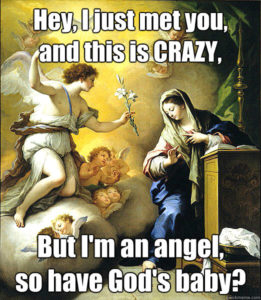 Quickmeme
“But ‘Hotline Bling’’—whether video-remixed online or riffed on by Donald Trump—was the closest Drake has come in his career to a full-on ‘Call Me Maybe’ moment.”
Chris Molanphy, “Why Is Drake’s “One Dance” No. 1?” Slate, May 16, 2016
SEE MORE EXAMPLES

Who uses Call Me Maybe?

The song has become a bit of a byword for massively viral songs and videos, e.g., “the next Call Me Maybe?” A “Call Me Maybe moment” can also refer to a wild success, like Jepsen’s hit, or a spontaneous decision, as depicted in the song.

At the height of its popularity from 2012 to 2013, Call Me Maybe inspired a viral trend of posting lip sync videos of the song, notably by celebrities like Katy Perry and sports teams like the 2012 USA Olympic swimming team, which in turn triggered many parodies. Humorous remixes emerged, including Sesame Street’s “Share It Maybe” and a redub edited together from speeches of Barack Obama. Predictably, this led to numerous Call Me Maybe inspired memes.

OKAY PEOPLE THAT'S IT, WE'RE DONE. NO "CALL ME MAYBE" MEME CAN EVER TOP THIS, PACK IT UP, ETC. pic.twitter.com/D3vJG6md

This is not meant to be a formal definition of Call Me Maybe like most terms we define on Dictionary.com, but is rather an informal word summary that hopefully touches upon the key aspects of the meaning and usage of Call Me Maybe that will help our users expand their word mastery.

But can it run Crysi...
cash me outside
Home / Words / Memes / Call Me Maybe