What does Daquan mean?

Daquan is a stock name which stands in for a fictional person in a meme from 2014. It’s supposed to function as an average name like John Doe or John Smith to represent black men. This name often appears with stock photos of white people who reference Daquan, who is generally a bad influence.

Where does Daquan come from? 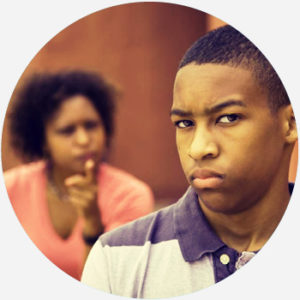 The Daquan memes started on Twitter with @RealRaymondJ on July 2, 2014. This first tweet had an image of a white teenager and mother, with the daughter looking away and lifting her hand in dismissal. The caption for the image reads “MOM I DON’T WANT A DAVID, I WANT A DAQUAN.” Following the initial tweet’s subsequent popularity, Daquan memes began appearing virally across the internet. 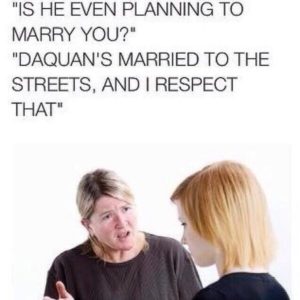 The premise of the meme revolves around nameless white teenagers having conversations with their parents about the wayward influence of Daquan, a fictional young black acquaintance.

Typically depicting white teens or their parents talking about Daquan‘s “negative” influence, the meme often references racist black sterotypes: drug use, teenage pregnancy, and being broke. In doing this, the Daquan meme pokes fun at racial tensions, highlighting some of the absurd fears and stereotypes white Americans have of black people, especially black men.

Another version of the meme is based on before and after images. This involves a side by side comparison of a woman before and after Daquan. The before picture is usually “innocent,” while the after picture has either a strong sexual undercurrent or a new, less “put together” style.

before & after one date with daquan pic.twitter.com/XPyLDUQbSr

At the same time, the meme can also feed racial tensions by reinforcing racist stereotypes under the guise of humor. Because of this, some Daquan memes can be interpreted as controversial and offensive.

This is not meant to be a formal definition of Daquan like most terms we define on Dictionary.com, but is rather an informal word summary that hopefully touches upon the key aspects of the meaning and usage of Daquan that will help our users expand their word mastery.