What does double rainbow mean?

A double rainbow consists of two rainbows, one over the other, popularized by a 2010 viral video. More specifically, the phrase can describe the viral video Yosemitebear Mountain Double Rainbow 1-8-10, which recorded such a rainbow over Yosemite National Park.

Where does double rainbow come from? 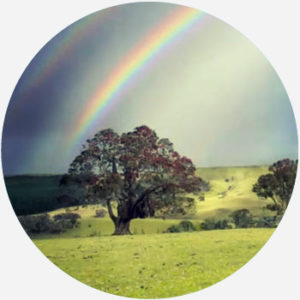 The term double rainbow has been used to describe the rare but spectacular meteorological phenomenon since at least the early 1800s. This long-established term was popularly evoked, however, on January 8, 2010, when Hungrybear9562, later Yosemitebear62, uploaded a video, “Yosemitebear Mountain Double Rainbow 1-8-10,” of a double rainbow in Yosemite National Park. In the video, he describes, with great emotion, his own sense of awe over the rainbow, observing that the rainbow goes all the way across the sky and exclaiming, “What does this mean?” Internet users found his earnestness and intense reaction charmingly comical. The video currently has over 44 million views.

The double rainbow video did not immediately gain fame, remaining relatively obscure through the first half of the year. In July, however, talk show host Jimmy Kimmel tweeted a link to the video that called it possibly “the funniest video in the world.” Interest immediately spiked, with views of the video climbing from just a few mere hits to over a million over the course of a few days.

On July 6, 2010, YouTuber schmoyoho posted a parody song of the video, “Double Rainbow Song,” with the speech auto-tuned and set to background music. This, too, went viral, eventually gaining over 35 million views. This song was covered by a number of artists, including singer-songwriter Amanda Palmer, helping bring yet more fame to the original double rainbow video.

The creator of the video, Paul “Bear” Vasquez, is a farmer near Yosemite and a former MMA fighter. Among other things, his video was used in the 2013 film We’re the Millers, and he starred in a Smartwater ad with Jennifer Aniston.

“I went slightly 'double rainbow guy' when I saw the sun pierce the clouds onto the in the yard. #beautiful #nature”
Jim Chandler @jimchandler1075 Twitter (May 6, 2017)
“A Double Rainbow Cake? What does this mean? It means a delicious looking (and tasting!) cake that will make your tastebuds go all the way!”
Gemma Stafford's Bigger Bolder Baking Facebook (April 18, 2017)
“Either way, the shocktail can be yours for $13 starting tomorrow. Toss back a few and then Instagram it when you start peeing double rainbows all the way.”
Daniel Maurer, “The Rainbow Food Trend Has Finally Caught On to Cocktails,” Bedford and Bowrey (April 28 2017)
SEE MORE EXAMPLES

This is not meant to be a formal definition of double rainbow like most terms we define on Dictionary.com, but is rather an informal word summary that hopefully touches upon the key aspects of the meaning and usage of double rainbow that will help our users expand their word mastery.