What does Just Do It mean?

Just Do It refers to a meme based on a video that features an intense motivational speech by actor Shia LaBeouf.

Where does Just Do It come from? 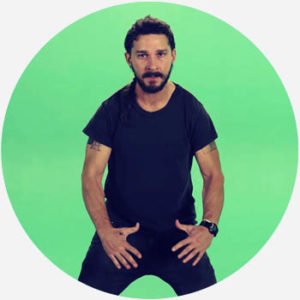 The Just Do It video, also known as Shia LaBeouf’s Intense Motivational Speech, was released in 2015. It shows actor Shia LaBeouf, of Nymphomaniac and Transformers fame, giving what is supposedly a motivational speech in front of a green screen. In it, LaBeouf repeatedly roars “Just do it!” at the camera while making wildly over-the-top, furious expressions and gestures. He also growls such lines as: “Don’t let your dreams be dreams, yesterday you said tomorrow, so just do it!”

This video exploded in popularity almost as soon as it was released. There was some misconception that LaBeouf made the video as an earnest motivational speech, particularly given Shia LaBeouf’s eccentric public persona. But, in actuality, LaBeouf’s zealous performance was part of an art project.

The Just Do It video has its origins in Central Saint Martins, the London arts college, where LaBeouf joined in on a project called #Introductions. This project had each student in class write a short script for LaBeouf to perform, lasting no more than 100 words, with an emphasis on strong emotion. LaBeouf actually did thirty of these performances, some involving different stunts or props. Other pieces from the same set can be found online. The Just Do It segment that went viral was written by student Joshua Parker, who intended it as a mockery of the corporate health and fitness industry, specifically targeting one of its most famous slogans, Nike’s Just Do It.

The green background is no accident; as many film students know, a green screen is used to superimposes backgrounds, special effects, props, and so on. Here, it allowed the London film students to edit in their own footage and use it as an introductory video for their projects. When the Just Do It clip went online, it was released under a Creative Commons license, specifically so that viewers could rework it however they pleased—which millions of people did do, and quite rapidly so.

Examples of Just Do It

“I feel like I will have to watch the 'Just Do It' @thecampaignbook video to motivate me to go to the gym in 2016.”
Melissa Kelly @Melissa_3011 Twitter (December 30, 2015)
“A minute-long video of Shia LaBeouf berating the viewer to ‘just do it’ is getting attention Monday as clever Internet users exploit the video’s green screen to put LaBeouf wherever they want.”
James Armstrong, “‘Just do it’: The best parody videos of Shia LaBeouf motivating things,” Global News (June 1, 2015)
“There are two kinds of people in the world: those who’ve already seen the hilarious clip of actor Shia LaBeouf screaming, ‘Just DO IT!’ furiously at the camera for two minutes, and those who will.”
David Pogue, “The Real Story Behind Shia LaBeouf's Hilarious 'Motivational' Rant,” Yahoo (June 2, 2015)
SEE MORE EXAMPLES

Who uses Just Do It?

Though the Intense Motivational Speech spread virally in its original form, it became even more intense when internet users began taking advantage of the green screen provided.

Because a green screen allows editors to replace the background with anything they want, the original Just Do It clip has been reworked to depict Shia LaBeouf’s speech in countless different scenarios. Videos have shown him giving the speech before massive crowds from archival film footage (e.g., Hitler’s rallies), delivering it as a TED talk, or superimposed onto the Batman V Superman: Dawn of Justice trailer. There’s even one version where he replaces Yoda in The Empire Strikes Back, with Shia telling a distressed Luke Skywalker to “Just do it!” and use the force.

There are also parody videos that show other people giving the same exaggerated speech in front of a green screen.

This is not meant to be a formal definition of Just Do It like most terms we define on Dictionary.com, but is rather an informal word summary that hopefully touches upon the key aspects of the meaning and usage of Just Do It that will help our users expand their word mastery.