or You On Kazoo or kazoo kid

What does Kazoo Kid mean?

Kazoo kid, also known as You On Kazoo, is a viral video of a young boy child enthusiastically playing a kazoo.

Where does Kazoo Kid come from? 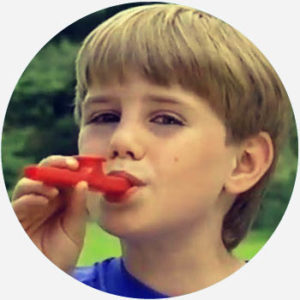 In 2011, YouTuber Jim VanBlaricum posted about a five-minute clip of a 1989 children’s show episode called You On Kazoo! It starred a young boy with a bowl cut, who would become known as the Kazoo Kid, instructing other children, with great zeal, how to play the kazoo in an original song.

Three years later, in August 2014, the channel Dead VCR released an even shorter version of the clip, about three and a half minutes long, editing together more scenes of You On Kazoo! As of 2017, the video now has over 15 million views, thanks to what many see as the hilarious weirdness and cringeworthy hamminess of the original You On Kazoo! production.

The next chapter of You On Kazoo’s fame came when it was shared to Reddit on the group r/DeepIntoYoutube in October 2015. Two days later, a SoundCloud user posted a techno remix of the segment, titled “dootdoot.” More remixes and reposts of the video followed, with Google search interest in Kazoo Kid and You On Kazoo spiking in 2016.

The website FragHero caught up with Kazoo Kid as an adult. His name is Brett Ambler and he continues to work as an actor. He confirmed his identity as the Kazoo Kid on Twitter in December of 2015. In 2016, he did an Ask Me Anything on Reddit.

“I've spent the last couple of days trying to make a spotify playlist meme for the entirety of You on Kazoo.”
@SpaceDiscos Twitter (April 24, 2017)
“I've gotten my hands on the full Kazoo Kid video, enjoy the cringe.”
Ryan Gregory Doka Facebook (February 5, 2016)
“In the video, you can see my friends all chose ones we all really liked, like Kazoo Kid and #NotMyRodrick.”
Nicole Pinto, reported by Madison Malone Kircher, “Extremely Good Teens Celebrate Meme Day at California High School,” New York Magazine (May 1, 2017)
SEE MORE EXAMPLES

Kazoo Kid is usually applied to the kid in the video, whereas the video itself is often called You On Kazoo. However, some simply refer to it as the Kazoo Kid video, after its star. Kazoo kid is mostly used self-referentially to the video, Brett Ambler, or the meme subculture You On Kazoo! inspired.

This is not meant to be a formal definition of Kazoo Kid like most terms we define on Dictionary.com, but is rather an informal word summary that hopefully touches upon the key aspects of the meaning and usage of Kazoo Kid that will help our users expand their word mastery.