Feedback
Nyan Cat
One does not simply

What does okay meme mean?

The okay guy is an image of a downtrodden-looking man that was originally drawn using Microsoft Paint. It’s often paired with red text that reads “Okay.” His face communicates sad, defeated resignation in response to whatever situation he’s in or is paired with.

Where does okay meme come from? 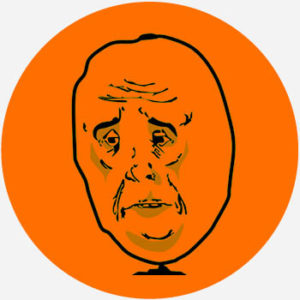 This rage face has existed since at around late 2010, if the upload dates on Know Your Meme are any indication. The okay guy originated in a style of comics known as rage comics. Rage comics have four square panels and can include a variety of standardized digitally-drawn faces. They tell a story about the frustrations of daily life and are peppered with these types of faces. The faces themselves have exaggerated expressions to easily communicate a feeling to a viewer with minimal effort on the part of the creator. Generally rage comics feature angry faces, but the okay guy just accepts his lot in life without putting up a fight.

As he enjoyed some popularity as a character in the rage comics, the okay guy even got his own image macro on the aptly-named meme generation website, Meme Generator, where he was added on February 10, 2011. On that site alone, there are over 89,000 images of him. He’s also made an appearance on Quickmeme, where he was given a page in 2011. On Quickmeme, many different memes featuring him have been shared across platforms over 600,000 times.

“Tried to rickroll the whole company No one knows what rickrolling is [okay guy image]”
Okay Guy, “Okay Guy,” Know Your Meme (April 18, 2013)
“The feeling when you wake up and you have only 3 minutes till the alarm rings… [okay guy image]”
Okay Guy, “Funny waking up late OK guy meme,” efunnyimages (April 13, 2015)
“What would you like to drink, sir? Could I get a coke? We have Pepsi. Okay [okay guy image]”
Two characters in a rage comic, with no attributable author, “Okay Guy,” Know Your Meme (August 24, 2010)
SEE MORE EXAMPLES

The okay guy is mostly confined to online forums. The most notable of these are Reddit and 4chan. He enjoys somewhat regular appearances on the subreddit for rage comics, /r/fffffffuuuuuuuuuuuu/. The okay guy just happens to be one of dozens of characters (rage faces) who each have a purpose in any given rage comic. He’ll often appear at the end of a rage comic where a scenario has taken place that warrants sad resignation or utter defeat. Outside rage comics, he can be found on image macros created on sites like Quickmeme or Meme Generator.

Finally, the okay guy often appears in stand-alone screenshots or posts that are independent of the aforementioned formats. While the other formats use him as a punch line of sorts, the effect is much more immediate in screenshots and posts. What makes these different is that the screenshots present real-life text or scenarios that require little to no exposition on the part of the creator. The person creating this new image can simply screenshot something and then show exactly how they feel about it with the okay guy.

This is not meant to be a formal definition of okay meme like most terms we define on Dictionary.com, but is rather an informal word summary that hopefully touches upon the key aspects of the meaning and usage of okay meme that will help our users expand their word mastery.