What does Passive-Aggressive Daenerys mean?

Passive-Aggressive Daenerys is a meme featuring a still image of Daenerys Targaryen from the TV series of Game of Thrones with a squinting, pinched, dismissive smile. The image is humorously paired with comments made in imitation of—or in reaction to—social remarks or incidents considered passive-aggressive, judgmental, or ignorant in some way.

Where does Passive-Aggressive Daenerys come from? 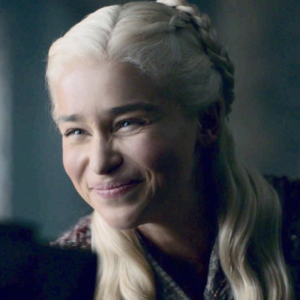 The image featured in Passive-Aggressive Daenerys, also called the Daenerys Targaryen Squint, comes from the second episode of the eighth and final season of the hit TV show Game of Thrones. In the episode, which aired on April 21, 2019, the powerful Daenerys (Emilia Clarke) smirks at the mighty Sansa Stark (Sophie Turner) during a tense conversation.

On April 22, Twitter user @reallyhalalfood posted a still image of Daenerys’s dismissive smile with a simple challenge: “Caption this.”

The captions flooded in, with users pairing the smile with comments parodying remarks people make that sound nice on the outside but judgmental or snide underneath. Such remarks can be called passive-aggressive, hence the name of Passive-Aggressive Daenerys for the meme.

As the meme went viral on April 23, popular media outlets such as Thrillist and The Daily Dot were referring to it as Passive-Aggressive Daenerys.

I am enjoying how the Passive Aggressive Daenerys Meme has evolved into Micro-Aggressive Things White People Say.
@WallE132, April 2019
Two episodes back, after "Winterfell," Emilia Clarke's character gave the world the passive-aggressive Daenerys meme, taken from her private conversation with Sansa Stark. In this week's episode, "The Last of the Starks," a post-Battle of Winterfell Daenerys is smiling a whole lot less.
Dustin Nelson, Thrillist, May 2019 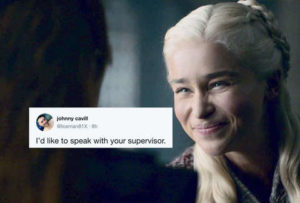 Passive-Aggressive Daenerys spread both because Game of Thrones was such a popular TV show and because the meme is so relatable, as The Daily Dot observed of it.

There are two main ways people use the meme. Some use the image as if it’s the smile a person is making while making a passive-aggressive remark or performing some judgmental action, of a racial or classist nature.

“You know what? Why don’t I just speak to your manager instead?” https://t.co/mSOWB51VKX

“You speak so well, which school did you go to?” https://t.co/IsEG14pCGT

Others use the meme as a reaction image, dismissing (as if with Daenerys’s facial expression) comments people make but may not realize come across as judgmental, entitled, ridiculous—you name it.

Me: I've been working very hard on my artistic skillset for over 15 years!

Them: ACTUALLY your **talent** is a **gift** and was given to you by **god**!! You have done nothing! Also it's not a skill! Also it's just a hobby and you should drop it and have babies instead!

Either way, Passive-Aggressive Daenerys is meant as a fun but incisive way to engage in social commentary online.