What does Salt Bae mean?

Salt Bae is a nickname for Turkish chef Nusret Gökçe, whose videos depict him chopping meat and then adding seasoning in a theatrical manner, a move which is also called a Salt Bae.

Where does Salt Bae come from? 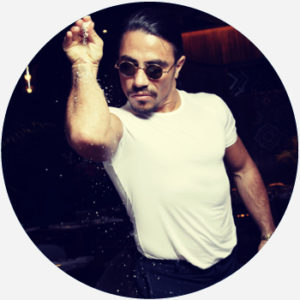 Turkish chef Nusret Gökçe is a rag-to-riches owner of a chain of restaurants called Nusr-Et. Though reviewers heap huge compliments upon the meals themselves, what started attracting patrons was, according to Gökçe, the way that he theatrically prepares the meals, which has been variously described as sensual, smooth, flamboyant, and sassy.

Gökçe became a worldwide sensation on January 7, 2017 when he posted a video of himself on Instagram in a form-fitting tee, sensually carving meat. He ends the video with his signature move: Gökçe lifts his arm up and flicks his wrist, in the pose of a cobra, seasoning the meat with salt as if he’s sprinkling fairy dust.

On the same day, tweeter @lolalissaa linked to the video and commented: “So this is #saltbae.” The video on Gökçe’s Instagram went viral, quickly gaining over 13,000,000 views and over 50,000 comments, and the nickname Salt Bae went viral with it. (Bae is an affectionate slang term used to address one’s boyfriend, girlfriend, spouse, etc.) Salt Bae’s meat-cutting prowess even gained the attention of actor Leonardo DiCaprio, who made a point to dine at Gökçe’s Istanbul restaurant. The gesture itself has become famous and is often imitated, especially by professional athletes to celebrate victorious moments.

The newly christened Salt Bae continued releasing videos of his culinary finesse, to much acclaim. However, by February 2017, Gökçe’s videos began straying from the subject matter that made him famous. By the time he posted a video of him waltzing around with a headless lamb carcass stuffed with a bouquet of roses, many online publications announced that Salt Bae had officially jumped the shark. The charge fired at these later videos was that the Salt Bae had become too self-aware, knowingly winking at the camera and milking his meme for laughs.

However, worries of the Salt Bae’s demise soon turned around a month later, when Gökçe returned with a new video that brought everything back to the basics: skillful, sensual meat preparation. Salt Bae’s comeback was warmly received by his fans.

“Did Matt Kemp just go #SaltBae after his home run? Think so! #ChopOn”
FOX Sports: Braves @FOXSportsBraves 16h Twitter (April 6, 2017)
“It's happened - the 'salt bae' phenomenon has breached the shell of the sporting world, and now it's everywhere. But what started all this and what are sports stars doing, exactly?”
Sean Gibson, “What is 'Salt Bae' and why are sports stars doing it when they celebrate?” The Telegraph (February 11, 2017)
“Since then, he's been dubbed 'Salt Bae' and video of him dusting the cut of meat has been transformed into gifs. More than 10 million people have watched his Instagram video.”
Rima Abdelkader, “Meet ‘Salt Bae,’ the Turkish Chef Whose Signature Move Made Him an Internet Sensation,” NBC News (February 5, 2017)
SEE MORE EXAMPLES

The most popular use of the term Salt Bae, when not referring directly to Gökçe himself, is in reference to his cobra-style sprinkling move. While this has been imitated by many chefs as one might expect, it’s also become a popular gesture in the world of sports. The Salt Bae is a celebratory move by an athlete who’s just achieved something spectacular, for example, getting a football into the end zone.

This is not meant to be a formal definition of Salt Bae like most terms we define on Dictionary.com, but is rather an informal word summary that hopefully touches upon the key aspects of the meaning and usage of Salt Bae that will help our users expand their word mastery.