What does Techno Viking mean?

Techno Viking (sometimes also spelled Technoviking) is a viral video and meme of a muscular, bare-chested man with a blond beard and ponytail dancing down the street at a music festival.

Where does Techno Viking come from? 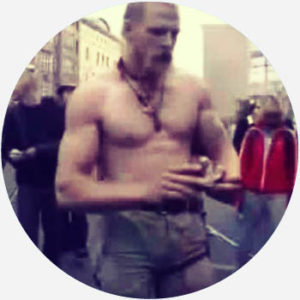 The Techno Viking got his name because in the viral video he is dancing to techno music at a technoparade, an event popular in Germany and other European countries. The Viking element comes from his strong, Nordic-looking appearance.

The original Techno Viking appeared in a four-minute experimental art video, “Kneecam No. 1,” recorded by Matthias Fritsch at the 2000 Fuckparade, a political and techno music event, in Berlin, Germany. The short film was intended to raise questions about the role of the camera and whether the sequence was staged or not. In it, the man dubbed Techno Viking engages in a series of encounters with fellow festival-goers in which he initially appears aggressive and intimidating until he joins in the dancing crowd. The original video was uploaded to YouTube in 2006, went viral in 2007, spreading, according to Fritsch, through a Central American pornography site.

The viral Techno Viking video has inspired countless re-enactments, parodies, and Chuck Norris-styled memes, with images frequently depicting the Techno Viking with his signature pointing gesture. However, Fritsch himself no longer accepts money from YouTube ads for his original video or related merchandise, after the actual Techno Viking, who remains unidentified to the public, sued him for infringing on his personality rights in 2013 following previous legal notices. Fritsch was ordered to stop circulating the video and all variations of it and pay nearly €25,000 in fines and fees.

Fritsch went on to release a documentary about the experience called The Story of Technoviking in 2015.

“Bros don't let bros not watch Techno Viking.”
@DavidCrools Twitter (May 10, 2017)
“In a Berlin courtroom earlier today, the Technoviking met his maker.”
Kevin Morris, “German court to decide future of Technoviking,” The Daily Dot (January 17, 2013)
“[Laina Walker] was lucky, as the image that was lifted to later become a meme happened to be on her own YouTube channel, meaning she could monetise the video by running ads on it, something Techno Viking was unable to do.”
Fruzsina Eordogh, “Techno Viking and the curse of internet celebrity,” The Guardian (January 24, 2013)
SEE MORE EXAMPLES

Thanks to his charismatic confidence in the video, the Techno Viking is sometimes ironically referred to as a mythic, powerful, god-like figure.

This is not meant to be a formal definition of Techno Viking like most terms we define on Dictionary.com, but is rather an informal word summary that hopefully touches upon the key aspects of the meaning and usage of Techno Viking that will help our users expand their word mastery.