Previous Word the cake is a lie
Next Word The Hacker Known as ...

What does The Duck Song mean?

The Duck Song is a catchy song featuring a duck who visits a lemonade stand every day and asks the man there for grapes. The Duck Song as a meme involves parody videos that play on the theme of the song.

Where does The Duck Song come from? 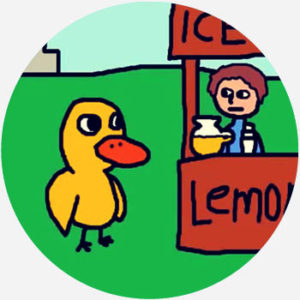 The Duck Song is by Bryant Oden accompanied by an animated video by Forrest Whaley, or forrestfire101 as he’s known on YouTube. The song was uploaded to YouTube on March 23, 2009 and has over 250 million views as of 2017. After its upload, it began to gain popularity and became a viral success.

People took notice of this and in October of that year, a piece titled “Viral YouTube Sensation ‘Duck Song’ Waddling into Hearts of Teens” was posted to the Send2Press Newswire website. The publication noted that comments on the original video mentioned that kids in schools across the nation were singing the song all the time. The song was very catchy and the visuals were quite charming. Forrest Whaley, who created the animation, was 15 years old when the video became popular.

The Duck Song meme began as a result of the video’s popularity. As with many popular things, people began to create their own versions of the song.

Examples of The Duck Song

“Watch the 2nd and 3rd duck song, they told a story about love”
Awsmedude, commenting on a Duck Song fan video, “KIDS REACT TO THE DUCK SONG,” YouTube (2015)
“A parody of the classic 'Duck song' by Bryant Oden. In this parody, Batman takes on the role of the duck. Please like, comment, and Subscribe!”
“The Duck Song ft. Batman,” YouTube Bruce Dwayne (August 1, 2016)
“they should make a minecraft duck song i'll totally watch that!!!”
Carson Twitchell, commenting on a Duck Song fan video, “The Duck Song-In Lego!” YouTube (2015)
SEE MORE EXAMPLES

Who uses The Duck Song?

The Duck Song meme is very conceptually simple. YouTubers take some of the original content from The Duck Song and create their own videos. This might be the visuals or the audio. These can be made in any medium. Some people choose to replace some characters but keep the background in their videos. Others keep the characters but create their own animations entirely. Some re-creations depart from digital animation, instead opting for stop motion or even using Minecraft or other games as their stage. In some cases, people even create their own sequels to the original, complete with a new plot. Any parts of the video may also be used in mashups with other songs or internet jokes.

This is not meant to be a formal definition of The Duck Song like most terms we define on Dictionary.com, but is rather an informal word summary that hopefully touches upon the key aspects of the meaning and usage of The Duck Song that will help our users expand their word mastery.

Previous Word the cake is a lie
Next Word The Hacker Known as ...