Feedback
transitive property
What are those?!

What does Voice Changer 3000 mean?

The Voice Changer 3000 … it will get you out of anything by simply changing your voice. Except … it is an internet joke about a fictional, futuristic device imagined to alter a person’s voice. Oops.

Where does Voice Changer 3000 come from? 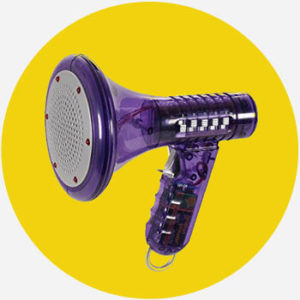 What if you needed your voice to sound different from how it normally does? Maybe to play a prank? Or, for some covert special ops?

If only you had the Voice Changer 3000, an imaginary device from the future.

Real voice-changing technologies exist, like the creepy-sounding pitch-changers used in interviews where a person wants to remain anonymous. The Voice Changer 3000, however, is just an internet joke, inspired by the use of voice changers in popular media, like superheroes and in anime.

It appeared online in 2009 as an entry on Urban Dictionary: “A voice changer that does not actually exist, but is in fact just a cruel joke played on you by your friend who has nothing better to do, than to pretend to have a voice changer.” The 3000, apparently, is meant as a humorous product model number that’s supposed to sound advanced and futuristic.

The Voice Changer 3000 arrived on Twitter in 2012, referring to a “talking” Optimus Prime mask, a Transformers toy based on the deep-voiced robot character.

In 2018, Voice Changer 3000 inspired the title and subject of an episode of the web cartoon, Mercy’s Meeting:

Online, people very occasionally reference Voice Changer 3000 as an internet inside joke that implies the device is amazing but whose fictional functions are a mystery.

This is not meant to be a formal definition of Voice Changer 3000 like most terms we define on Dictionary.com, but is rather an informal word summary that hopefully touches upon the key aspects of the meaning and usage of Voice Changer 3000 that will help our users expand their word mastery.

transitive property
What are those?!
Home / Words / Memes / Voice Changer 3000