Feedback
Y U NO

You the real MVP

or You’re the real MVP or You da real MVP

What does You the real MVP mean?

You the real MVP is meme that humorously applauds people for doing mundane but helpful acts. It usually features an image of basketball player Kevin Durant.

Where does You the real MVP come from? 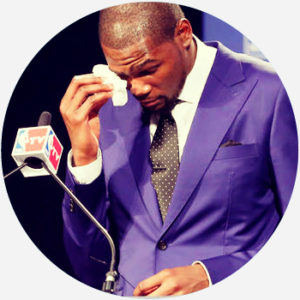 In the context of sports, MVP has stood for “Most Valuable Player” since at least the 1930s. It’s an annual accolade given to a single player in a sports league at the end of a season, as voted by other players, sports writers, and sometimes fans. MVP has also extended to refer to any outstanding or exceptional performance outside of sports.

In May 2014, Kevin Durant won the NBA’s annual MVP award. At the ceremony, he took a tearful and heartfelt moment to acknowledge the sacrifices his mother (who was in the audience) had made while raising him so that he could reach that point in his career. He ended by telling his mother, “You the real MVP,” and the audience launched into applause. The camera caught Durant clapping along with the audience, tears streaming down his face.

Several news outlets covered the notable speech, which spread its influence beyond the basketball fandom. Search interest in the quote and video spiked almost immediately. On May 6th, 2014, SportsCenter tweeted about it, highlighting the quote “You’re the real MVP.” That same day the tweet was also shared on Reddit.

Not long after, people started to take the image of Durant crying or applauding, adding captions poking fun at the moment. They’d jokingly applaud themselves or others for minor acts of “heroism” like sharing wifi passwords, letting others copy their homework, or giving out full-size candy bars on Halloween.

As the meme spread, even Kevin Durant caught wind of it. He mentioned in an interview with GQ that he disliked the meme for poking fun at a genuinely emotional moment for him, and even went so far as to say those perpetuating the meme “have no morals.”

Examples of You the real MVP

“Alpha Testers, you the real #MVP”
@firstbloodio Twitter (May 11, 2017)
“S/o to all the moms and dads that actually came and helped their kids move out today, you the real MVP”
@hart_breaker12 Twitter (May 16, 2017)
“Quickly, ‘You the real MVP’ transformed from an emblem of a single mother’s sacrifice into something truly horrendous: an Internet meme.”
Maxwell Strachan, “Kevin Durant Says Everyone Who Made ‘You The Real MVP’ Jokes Has ‘No Morals,’ Is Probably Right,” The Huffington Post (February 19, 2015)
SEE MORE EXAMPLES

Who uses You the real MVP?

The meme itself typically consists of an image or GIF of Kevin Durant applauding or wiping his eyes during his 2014 MVP acceptance speech. The first part of the image caption usually addresses people who do small but helpful or praiseworthy acts. The second part usually just says “You the real MVP.”

This is not meant to be a formal definition of You the real MVP like most terms we define on Dictionary.com, but is rather an informal word summary that hopefully touches upon the key aspects of the meaning and usage of You the real MVP that will help our users expand their word mastery.