Feedback
Previous The Mysterious Origins Of The Month Of April's Name Next "Crevasse" vs. "Crevice": Understanding The Chasm Of Differences

The latest update to Dictionary.com reflects our mission to help make sense of the world through words.

Of the hundreds of newly added terms, some define our times, notably those related to the ongoing COVID pandemic and climate emergency. Other updates cover important changes in how we talk about a vast range of topics, including disability, accessibility, homelessness, and countless aspects of culture.

The variety ranges from Generation A to zeitgeisty, from the timely (metaverse) to the old-timey (cheeseparing) to the timeline-bending (bootstrap paradox).

Our tireless team of lexicographers touched over 2,400 entries across our dictionary. Highlights include:

As you can see, this update consists of more than just newly added terms. We also added new definitions to existing entries, revised outdated definitions, and updated other content, such as pronunciations and etymologies. And remember: just because we just added a word to our dictionary doesn’t mean it’s brand new to the English language (in fact, many have been around for quite a while).

🤔 How do dictionaries work?

If you’re wondering why some words that get added to the dictionary aren’t necessarily new, read more about how dictionaries work and get answers to these questions and more:

All that said, we’re well aware that it’s the newly added words that draw most of the attention and questions. Here are some of the terms that are likely to grab headlines and that you’ll probably start to encounter more and more.

Find out if you’ve been paying attention to the latest updates in the English language by taking the quiz on these new words.

If you haven’t yet, you’re likely to start encountering some of the newly added terms that are increasingly used in reference to people who lack stable housing. Each of these is often intended to convey a specific nuance of meaning:

The word homeless, as explained in the new usage note on that page, can be offensive or disparaging, especially when used collectively (the homeless), which can stigmatize or reinforce negative associations or assumptions, such as the pervasive notion that homelessness results from a stubborn refusal to work, or a substance or alcohol use disorder, for example. Such stereotypes ignore the many circumstances and factors that contribute to homelessness, including the high cost of housing, poverty, mental illness, domestic violence, and other forms of abuse.

It’s important to emphasize, though, that the term homeless is still widely used and even preferred as a term of self-identification among some people without stable housing.

Still, use of alternative terms is increasing among members of that community and by advocates who view those expressions as better able to convey the range of experiences that can be lumped together (and obscured) under the single term homeless. Some prefer unsheltered and unhoused because they frame homelessness not as a personal failing or defining characteristic, but rather as a condition, one that must be addressed through societal responsibility and policies.

As Dictionary.com Lexicographer Heather Bonikowski told Forbes recently, the increase in the availability of assistive technologies has brought with it an influx of terminology.

Here are some of the newly added terms related to accessibility tech:

That last term, closed caption, may sound familiar, but it’s a more recent noun form of closed-captioned. Closed-captioned is one of the existing entries whose definition was revised to reflect what it means today. Other updated entries include caption, CC, and subtitle.

You’re probably familiar with some of these terms, or at least the technologies they refer to. But the specific features of each type can differ and overlap—and capturing these distinctions and similarities is one of the challenges of defining these words.

Here’s a chart that breaks down the typical characteristics of each technology. It shows some of the nitty-gritty lexicographical research that goes into crafting definitions for such terms (which are certain to continue to evolve in meaning and use). 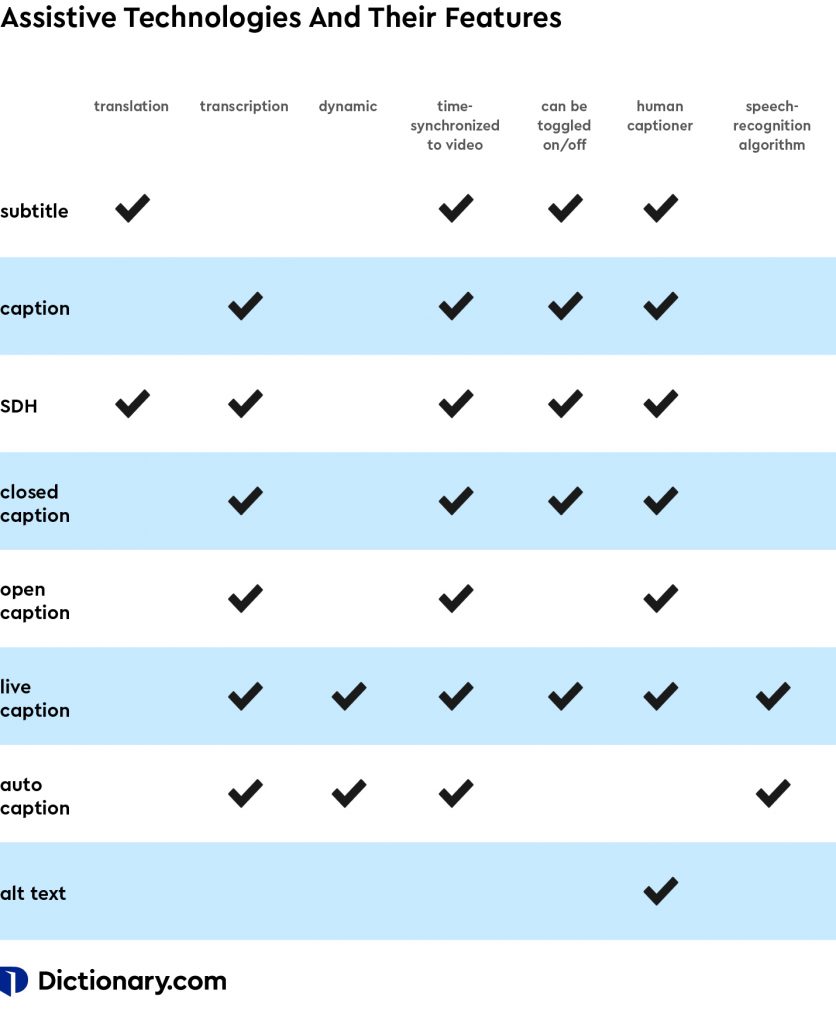 Among the many changes made to terms used in the context of disability was the addition of an important usage note for disability itself:

Disabled is a comprehensive umbrella term to describe people or communities of people who live with functional limitations in carrying out major life activities, such as walking, lifting, seeing, or learning. When should disabled be used to describe someone? First, in many cases, there is no need to mention disability; it is often not relevant to the information being conveyed. In most cases, when disabilities are mentioned, it is preferable to name the person’s specific physical or mental condition, like diabetes or traumatic brain injury. However, when addressing an issue that affects the larger community of people living with such functional limitations in daily activities, for example, when discussing accessibility in the workplace, disabled and disability are the appropriate terms.

Some people prefer person-first constructions like “a person with a disability” to emphasize the whole person, not defined exclusively by living with a disability. Others use identity-first language like “a disabled person” to center the disability as an important aspect of identity and push back on the presupposition that disability is inherently negative, unmentionable, or something to be politely ignored.

Following similar logic, the euphemisms “special,” “challenged,” “differently abled,” and “handicapable” are not recommended. The straightforward, simple, and descriptive term disabled is preferred.

After more than two years, COVID continues to change our lives and language in ways that will likely be long-lasting. Some new terms emerged during the pandemic. In other cases, existing terms became more established in mainstream use due to the influence of COVID on so many aspects of our lives. Many of the terms are examples of the evolving language of vaccination and masking, including:

Climate change continues to change our planet and our lives in countless ways, including in the often overlapping contexts of science, personal behavior, politics, policy, activism, and tech innovations, all of which are sources of emerging terminology.

Chief among the terms we’ve added in this area is one that is now commonly used to capture the urgency of the issue:

Our additions also reflect a focus on the extreme weather events driven by climate change—and the greater awareness and mainstream use of some of the technical terms used in studying and discussing them. Some of these include:

We’ve also captured terms for other environmental issues becoming more prominent in mainstream consciousness, as well as some words related to energy technologies often cited in the discussion of climate change mitigation, including:

Here’s a chart to help visualize the overlap and differences between these terms for electric vehicles. We’ve included traditional gas-powered vehicles and bicycles as points of reference on the spectrum. 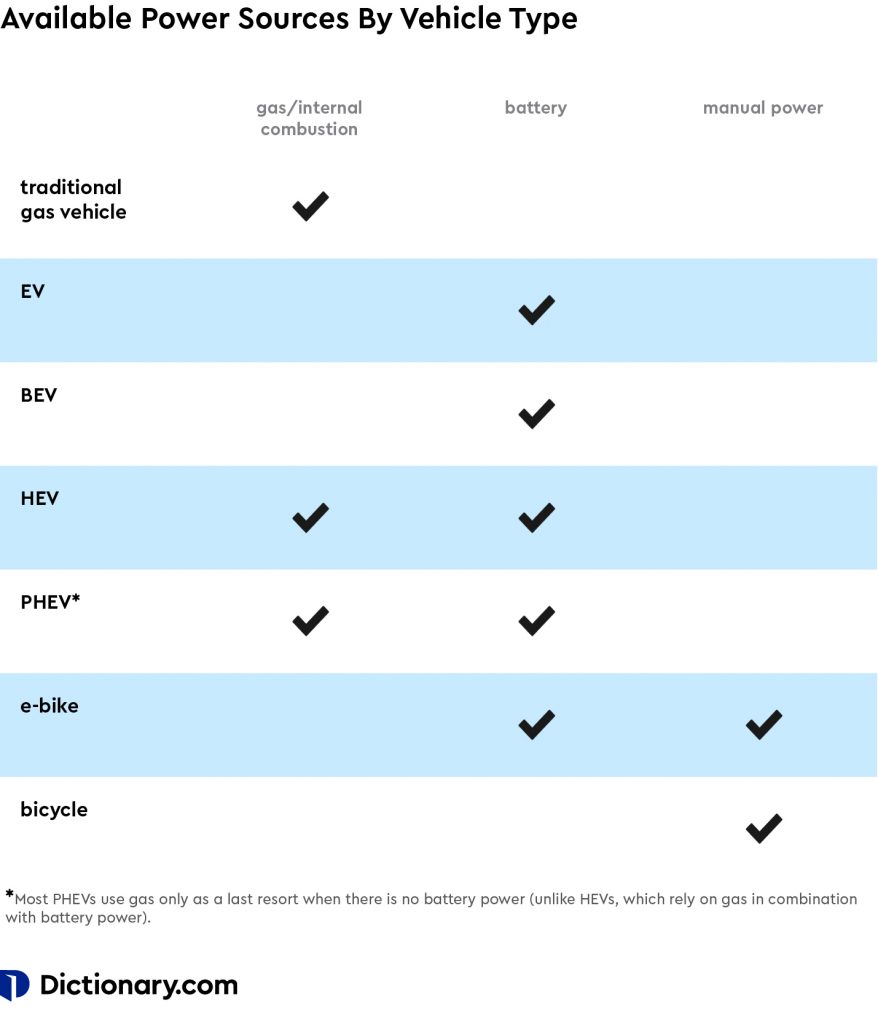 More than ever before, our everyday discussion of a wide range of issues features vocabulary initially used and developed by professionals and academics in fields like sociology, psychology, and race and gender studies. Of course, many of these terms are not at all new, but have been more recently adopted into (or are trending toward) mainstream use. Here are some of the terms we’re adding to the dictionary for the first time or whose definitions we’ve updated to reflect modern senses:

Here’s the thing about words: they’re used in literally every context. Our lexicographers take note of a vast span of topics, tracking terms that have become an established part of a subculture or that go on to make headlines or even enter mainstream awareness as “household words.” In this section, you’ll find entries as diverse as Generation A (the one after Gen Z), UAP (different than UFO), throuple (three + couple), chair yoga (yoga with a chair), and verklempt (yet another useful Yiddish word), as well as many, many others.

Of the hundreds of new terms and definitions we’ve added, here’s a group that stands out, among many other reasons, for its sheer variety. We’ve broken them down into categories, including:

🤷 And whatever category NFT (non-fungible token) falls under.

Along with NFT, new additions include several significant acronyms and abbreviations, including:

We’ve even tackled a timeline-bending set of terms that see frequent use in sci-fi and pop culture discussion:

Here are just a few miscellaneous examples that show how much variety our lexicographers have to tackle in terms of diversity of topics:

Review our new additions and updates from recent years:

Previous The Mysterious Origins Of The Month Of April's Name Next "Crevasse" vs. "Crevice": Understanding The Chasm Of Differences
RELATED POSTS

Home / Trending Words / New Words / From “Generation A” To “Zeitgeisty”: Over 200 New Words And Definitions Added To Dictionary.com