What does 10th Amendment mean?

The 10th Amendment is an addendum to the United States Constitution and exists within the Bill of Rights. Its exact language states that “The powers not delegated to the United States by the Constitution, nor prohibited by it to the States, are reserved to the States respectively, or to the people.” In simple terms, it helps to define the division of power between the national government and the state governments.

Americans love to refer to the First Amendment and our right to “free speech.” But what exactly does the term mean? Learn more here.

Where does 10th Amendment come from? 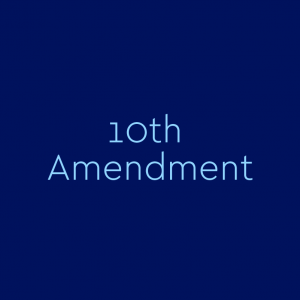 The 10th Amendment is the last entry in the Bill of Rights, which was created in order to restrict the range of governmental power and to preserve individual liberty. Though there were a total of 12 original amendments approved by the Senate, two of them weren’t ratified by the states.

The 10th Amendment itself was passed by Congress on September 25, 1789, and was ratified by the states on December 15, 1791 to become, well, the 10th amendment to make the cut. Since it’s in the Constitution, the 10th Amendment hasn’t changed at all from its original wording, although its relevance and interpretation has been subject to varying opinions. Its interpretation, in fact, has been subject to heated conversations about the Founding Fathers’ intentions.

Much of the discussion of the 10th Amendment revolves around discourse that seeks to explain it. After all, it’s no secret that technical jargon like that present in the Constitution can be tough to understand. It also pops up in discussions about its contemporary use in the current political landscape. For example, in 2016, the 10th Amendment was very relevant with regard to laws about marijuana. On the federal level, it’s an illegal substance, but on the state level, in some cases it’s legal. Another significant example is the decision of some states to allow for marriage equality for LGBTQ+ individuals prior to the Supreme Court case that ruled that excluding these individuals from the ability to marry was unconstitutional (Obergefell v. Hodges).

The Most Perfect Album: Episode 3 https://t.co/RZ3OgolssO via @moreperfect 10th amendment. This amendment is why you can buy cannabis in various states while at the same time the federal government outlaws it. It is a two-edged sword.

“It would be nice if state and local power were more a matter of principle than politics, but I guess the 10th Amendment will take whatever support it can get.”
David Davenport, “Battle Lines Are Redrawn as Democrats Rediscover the 10th Amendment and State Power,” Forbes (January 13, 2017)
“But when it comes to the amendment that has been the most ignored, misinterpreted or abused, few could argue against the 10th Amendment.”
Tim Donner, “The 10th Amendment and revival of federalism,” The Washington Times (December 12, 2016)
Imgur
“Nothing in the Tenth Amendment says that powers—such as power to regulate child labor as part of commerce, for example—must be explicitly or expressly given to the federal government.”
Garrett Epps, “Constitution Myth #7: The 10th Amendment Protects ‘States’ Rights’,” The Atlantic (July 11, 2011)
SEE MORE EXAMPLES

The wording of the 10th Amendment itself is a bit tricky. While other sections of the Constitution use the words explicitly or expressly when talking about governmental powers, the 10th Amendment does not. This has been a source of controversy when it comes to its interpretation. Those who try to sneak the word in as though it always existed in the original document tend to be harshly criticized.

This is not meant to be a formal definition of 10th Amendment like most terms we define on Dictionary.com, but is rather an informal word summary that hopefully touches upon the key aspects of the meaning and usage of 10th Amendment that will help our users expand their word mastery.