1488, along with other variations, is a secret code used by neo-Nazis and other white supremacists to identify and signal their ideology. 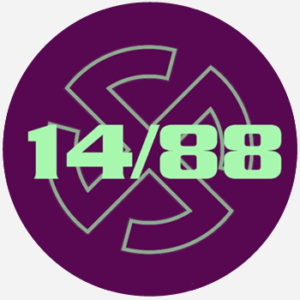 The numbers 14 and 88, used in various combinations, are a code used by neo-Nazis and white supremacists to broadcast hate speech in a covert manner and to show their alliance with others in their movement. The number 14 refers to David Lane, a notorious white supremacist leader and murderer, who at one point issued the 14-word statement: “We must secure the existence of our people and a future for white children.” Lane, who was incarcerated for various crimes including the assassination of a Jewish radio host, wrote his infamous words in 1985 while in prison (he ultimately died in prison in 2007). The number 88 refers to the fact that H is the eighth letter of the alphabet, so 88 is HH. This stands for “Heil Hitler,” part of the historic Nazi salute. Essentially, 1488 is a callback to these two figures and their racist ideologies.

In Germany, overtly Nazi symbols such as the swastika are banned from use, so these codes have been a way for Neo-Nazis to circumvent these laws. According to Michael Weiss, an expert on German right-wing extremism, there are at least 150 such codes, and they are hidden everywhere, from license plates to signs at football games. Many white supremacists tailor their crimes according to these numbers. For example, in 2008, the presidential candidacy of Barack Obama prompted two Tennessee white supremacists to put together an assassination attempt. Both men were arrested, and it was revealed that in addition to plotting to murder Obama, they also hoped to murder 88 people, and then to behead 14 African-American children.

Rule of the Internet #1488: If a meme exists, there also exists a Nazi edit of it
@GamingAndPandas, September, 2016
The code is often written as 1488 or 14/88 in digits - some racist stores even sell merchandise for $14.88 - but the dice allow the message to be carried, and passed on, in secret.
James Wilkinson, “The 'new swastika' and other symbols of hate hidden in PLAIN SIGHT: How to spot the secret images that far-right extremists use to recognize each other,” Daily Mail, February, 2017
If you were at a German soccer game and saw fans holding up the numbers 14 and 88 in cardboard numerals, you might imagine them to be, say, the shirt numbers of fans' favorite players. But you'd be wrong. In fact, the numbers hold a much more sinister meaning: They are actually neo-Nazi symbols.
“The Truth about 88: New Book Reveals Secret Meaning of Neo-Nazi Codes,” Spiegel Online, June, 2011
SEE MORE EXAMPLES

The use of 1488 in any form is a racist statement, tied to the history of white supremacy, Nazism, and attempts to murder and/or enslave Jewish people, African Americans, Latinos, Muslims, and any other non-white populations. When posted on social media, these numbers serve as a call sign for white supremacists to recognize one another, sometimes by spacing the numbers apart within one’s username or by using them at the end of one’s email address. Sometimes, hate-themed merchandise will be priced based on this code: for example, the racist Neo-Nazi video game Ethnic Cleansing, created by the white-nationalist organization National Alliance, was priced at $14.88. The numbers are also seen in flags, social media, and tattoos.

The configuration or display of 1488 makes no difference: 8814 means the same thing as 1488, as does 14/88 or 14-88. Another secret symbol of white supremacist groups, based on the 1488 code, is a symbol depicting two dice. These dice are positioned in such a way that the two faces on the first dice show a one and a four (representing 14), and the second two dice show a five and a three (eight total). As the swastika is such a widely-recognized hate symbol, these lesser-known dice are a way for these groups to signal their racist beliefs in plain sight. Of course, this doesn’t mean that all dice tattoos, icons, or avatars are hate symbols, nor all uses of the numbers 14 and 88, but be very mindful of context. Some neo-Nazis and white supremacists are sometimes called as 1488-ers.

This is not meant to be a formal definition of 1488 like most terms we define on Dictionary.com, but is rather an informal word summary that hopefully touches upon the key aspects of the meaning and usage of 1488 that will help our users expand their word mastery.