Everything After Z by Dictionary.com
Previous Word antifa
Next Word Comey

What does Civil Rights Act of 1964 mean?

The Civil Rights Act of 1964 is a landmark piece of legislation that outlawed discrimination on the basis of race, color, religion, sex, or national origin in voter registration, employment, and public accommodations, including ending racial segregation in schools.

Examples of Civil Rights Act of 1964

“But rather than using the opportunity to have a fuller discussion of discrimination and equality in the workplace—or even better, to talk about representation in media—one conservative commentator, Selwyn Duke at the New American, took the news as a reason to call for obliterating Title VII of the Civil Rights Act of 1964 entirely.”
Imani Gandy, “Yes, We Actually Need Anti-Discrimination Laws to Protect Employees of Color,” Rewire, May 2, 2017
Several transgender people sued the state in federal court last spring, alleging HB2 violated their civil and constitutional rights, and the Justice Department under former President Obama filed its own lawsuit alleging the state violated the Civil Rights Act of 1964. North Carolina also sued the Justice Department.
Dominic Holden, “North Carolina Paid Private Lawyers Nearly $700,000 To Handle Lawsuits Over Its Anti-LGBT Law,” BuzzFeed, May 24, 2017
So far, 240 Democrats—46 in the Senate and 194 in the House of Representatives—have signed onto the Equality Act, a bill that would amend the landmark Civil Rights Act of 1964 to include gender identity and sexual orientation.
Nico Lang, “This LGBT civil rights bill could make history, but there’s a problem,” Salon, May 5, 2017
SEE MORE EXAMPLES

Where does Civil Rights Act of 1964 come from? 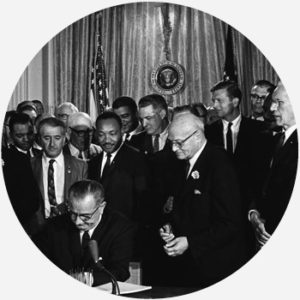 During the Civil Rights Movement of the 1950s–60s, black Americans fought hard for basic rights they had been functionally or legally denied. While the movement produced small political victories in 1957 and 1960, the social climate remained pressurized. By June 1963, amid reports of police brutality against black people, President John F. Kennedy proposed a comprehensive anti-discrimination bill. After his assassination in November 1963, president Lyndon B. Johnson took up Kennedy’s bill, urging Congress to support it, in part, to honor his memory.

The House of Representatives debated Kennedy’s bill, known as HR 7152, for nine days, ultimately rejecting many amendments proposed to weaken it. In the Senate, however, HR 7152 opponents filibustered the bill for over 50 days.

After revisions and compromises, the new version passed in the Senate and in the House. Lyndon B. Johnson signed the bill on July 2, 1964 in the presence of civil rights activist Martin Luther King Jr., and the Civil Rights Act of 1964 became law.

The Civil Rights Act of 1964 was extensive. In addition to outlawing discrimination based on the protected classes of race, color, religion, sex, or national origin, it made equal access to public places and equal opportunities for employment mandatory. It also ensured enforcement of the right to vote and demanded desegregation of schools.

On signing Civil Rights Act of 1964, LBJ told Americans, "Let us pray for wise and understanding hearts. Let us lay aside irrelevant differences and make our Nation whole." pic.twitter.com/1C81rLRfS0