What does Comey mean?

Based on controversies involving former FBI director James Comey, Comey is used as political slang, to pull a Comey or to Comey.

To pull a Comey can refer to flip-flopping, bungling something at the last minute, and making decisions based on assumptions of how they will be perceived.

To Comey can also refer to bungling, self-protectively recording conversations with someone, or firing someone for corrupt reasons.

Where does Comey come from? 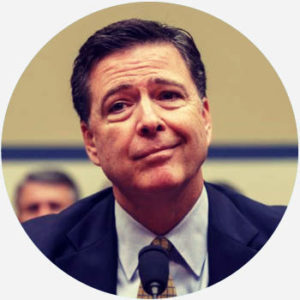 After serving in the Clinton and Bush administrations, career attorney James Comey was appointed by President Barack Obama in 2013 as Director of the Federal Bureau of Investigation (FBI). Comey mostly stayed out of the public spotlight until the 2016 US presidential election. In July, 2016, Comey issued a statement saying the FBI had closed an investigation into candidate Hillary Clinton’s use of a private-email server while she was Secretary of State. Then, just weeks before Election Day in late October, Comey announced the FBI had reopened the case.

While Comey claimed he made the public statements—uncharacteristic for the FBI and ongoing investigations more generally—to prevent charges of bias, many, including Clinton herself, blamed them for unduly tipping the election to Trump. After Trump won office, the FBI began investigating the Trump campaign’s alleged collusion with Russia during the election. Following a series of events many observers think amount to obstruction of justice,  Trump notoriously fired Comey in May, 2017 citing criticism of how Comey handled the Clinton email inquiry.

Thanks to his dramatic role in these scandals, Comey inspired a number of slang terms. First, to pull a Comey emerged as political slang for “flip-flopping” or “reversing a charge” on Twitter in July, 2016 upon Comey’s first major public announcement. The phrase had evolved by 2017 to “making premature decisions based on faulty assumptions.” The slang follows the pull a (person’s name), or behave in manner characteristic of that person, dating back to the early 1900s.

Second, to Comey (somebody)—drawing on a long history of verbing names (e.g., bork)—took on various senses starting in 2016. To Comey can mean “messing something up at the last moment,” as some believe Comey did to a Clinton victory in 2016. Thanks to Donald Trump’s public disputes with Comey, to Comey also came to mean “to record or report problematic interactions with someone who may try to use events against them,” as Comey kept memos of his meetings with Trump. Finally, to Comey also developed the meaning of “to fire someone for corrupt purposes,” in reference to his dramatic dismissal by Trump.

In April, 2018, Comey released a memoir, A Higher Loyalty, and conducted a prominent media tour, leading to further spikes in pulling a Comey and to Comey, including occasional new senses of “to profit off controversy.”

There are 17 hours of voting left. You've really Comeyed this vote.
@ModernMrDarcy, September, 2017
This is still an ongoing investigation. Graham pulling a Comey premature speculation...
@chm_chuck, January, 2018
We can agree, then, that “pulling a Comey,” is the folly of acting out of self-observation. By operating in anticipation of potential reactions, Comey sullied the purity of the decision-making process, and, as a result, altered his professional guidelines.
Lauren Duca, Teen Vogue, May, 2017
SEE MORE EXAMPLES

Pulling a Comey and to Comey are used in colloquial speech and writing, especially on Twitter, among professional political observers and everyday followers of current events. The terms may be used either in direct commentary on politics or in humorous reference to them.

This is not meant to be a formal definition of Comey like most terms we define on Dictionary.com, but is rather an informal word summary that hopefully touches upon the key aspects of the meaning and usage of Comey that will help our users expand their word mastery.