Everything After Z by Dictionary.com
Previous Word: Dubya
Next Word: Emancipation Proclam...

“The electoral vote on Monday—by the people who represent the Electoral College votes awarded on Election Day—has been the occasion for much speculation, hope and debate.”
Lily Rothman, “The Electoral College Votes Today. But Politicians Have Been Trying to Reform It for Decades,” Time (December 19, 2016)
“But [Al Gore] lost the election after losing Florida in the electoral college.”
Paul Smalera, “Voting for a third party candidate in this election is the worst thing you can do for American democracy,” Quartz (September 29, 2016)
“Trump won by threading a needle in the Electoral College, carrying four large states by one percentage point or less: Florida, Michigan, Pennsylvania and Wisconsin, a total of 75 electoral votes.”
Whit Ayres, “Threading the Needle,” US News & World Report (November 28, 2016)

Where does Electoral College come from? 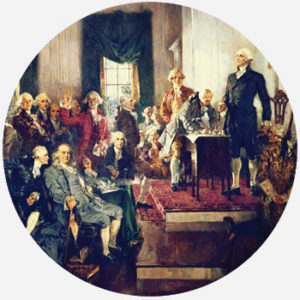 Though Electoral College sounds like an institution where one could earn a degree, it is actually the name of a process in which a body (college) of representatives (electors) vote for the president of the United States. This process was established in Article 2, Section 1 of the US Constitution in 1787, which references “electors” appointing the “executive Power” on the basis of Congressional and Senatorial representation. The specific phrase Electoral College, however, wasn’t written into law until 1845.

The Founding Fathers of the US designed the voting process of the Electoral College to prevent the public from electing an unqualified candidate and to ensure more populous states didn’t always determine the president over smaller states, many of which had a large slave population who historically were not allowed to vote.

So, instead of an outright popular vote, in which the winner is selected by whoever earns the most individual votes across the country, a presidential vote in the US is actually a vote for electors within one’s state of residence, who then pledge to vote for the candidate with the most votes in the Electoral College. For example, if the Democratic presidential candidate wins the state of North Carolina, then the electors in North Carolina will be able to vote for them in the Electoral College. Each state has a different proportional number of electors, based on population, with a total of 538 in the country. For a candidate to win the election, they must be voted in by at least 270 electors. Forty-eight states use a winner-take-all method wherein whatever candidate wins the popular vote of a state takes all of the electors, but Maine and Nebraska use a Congressional District Method, which gives one electoral vote to each state’s congressional districts.

Electors are chosen within each state by political parties, often voted on by the party’s committee and usually based on their prior service to the party. Though nominated electors can be politically active, they are forbidden from being a representative, senator, or holding any office of trust or profit. While electors pledge to vote for a candidate, they are not bound to do so, and are called faithless electors if they vote for a different candidate or don’t vote.

The electors do not meet and vote on Election Day itself; rather, they meet on the first Monday following the second Wednesday after the day of their appointment.

There is still fervent debate about whether the United States should switch a purely popular vote system. These arguments heated up in 2016 when candidate Donald Trump lost the popular vote to rival Hillary Clinton by nearly three million votes yet won the presidency due to the Electoral College system. Trump is the fifth President to lose the popular vote, following John Quincy Adams, Rutherford Hayes, Benjamin Harrison, and George W. Bush in the 2000 election.

There has long been a movement to end the Electoral College, but this presents unique challenges since the system is enshrined in the Constitution and such a change would require a Constitutional amendment. However, the National Popular Vote bill seeks to bypass this; the bill would make it so that if a candidate wins the national popular vote, any state that has ratified the bill will give their electoral votes to the popular winner. So far, this bill has passed in eleven states.