Everything After Z by Dictionary.com
Previous Word Emancipation Proclam...
Next Word First Amendment

What does fake news mean?

Fake news can refer to false new stories, often spread as propaganda on social media. It can also characterize any information that one finds critical about themselves, popularized as a catchphrase by Donald Trump after the 2016 presidential election.

President Donald Trump finally admits that “fake news” just means news he doesn’t like
Dara Lind, Vox (headline), May, 2018
In 4 steps, this man proved that creating a fake news following on Facebook is ridiculously easy.
@AJEnglish, June, 2018
The Fake News is working overtime. Just reported that, despite the tremendous success we are having with the economy & all things else, 91% of the Network News about me is negative (Fake). Why do we work so hard in working with the media when it is corrupt? Take away credentials?
@realDonaldTrump, May, 2018
SEE MORE EXAMPLES

Where does fake news come from? 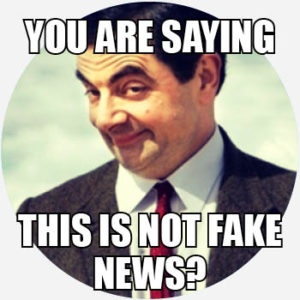 Actual fake news, wherein a group or individual purposely misleads someone with inaccurate facts, is as old as humanity, though the term doesn’t hit print until the 19th century.

In the 20th century, fake news became associated with popular satires, including the comedy paper The Onion and the TV show The Colbert Report. In the 21st century, far-right organizations like Breitbart News, conservative cable channel Fox News, and conspiracy sites like InfoWars developed a reputation for spreading fake news stories.

The phrase rose to prominence, however, during the 2016 presidential election amid an explosion of false, inflammatory stories spread on social-media sites like Facebook that favored Republican candidate Donald Trump and attacked his Democratic opponent, Hillary Clinton.

With many originating out of Macedona and perpetrated by Russia, the fake news stories spanned from outright disinformation, such as Pope Francis endorsing Donald Trump, to outrageous conspiracies, including so-called Pizzagate, which pretended Clinton was running a child sex ring out of a DC area pizzeria.

Clinton herself notably used the phrase in December, 2016 when she decried “an epidemic of malicious fake news and false propaganda that flooded social media over the past year.” The New York Times picked up the term, helping to further spread it.

After his election, Trump turned fake news into his catchphrase, issued—or tweeted—at actual news stories that were negative (even if accurate) about him, often directed at news organizations like CNN and The New York Times. He first used the phrase on Twitter in December, 2016.

Reports by @CNN that I will be working on The Apprentice during my Presidency, even part time, are ridiculous & untrue – FAKE NEWS!

Thanks to his trumpeting of the phrase, fake news spread in colloquial speech and writing for any information someone objects to, regardless of its truth value, and it can even used ironically as a putdown (e.g. I didn’t eat the last cookie, Mom. Fake news! ). This development in meaning compelled the American Dialect Society to choose fake news as its 2017 Word of the Year.

In 2018, Trump held “Fake News Awards,” which ended up being a list of articles by the mainstream press whose errors have since been corrected and which was roundly mocked in popular culture.

The media and media literacy/studies experts use fake news to refer to stories that are presented as real news but are in fact disinformation.

If you watch CNN then you must be on the left and super ignorant. CNN is fake news. #MAGA

Authoritarian leaders of other countries have also taken up fake news. In June, 2018, for instance, President Assad of Syria called reports of chemical attacks fake news.

Assad on the alleged chemical attack in Syria’s Douma: It is all a pure hoax, a deliberate piece of fake news staged by Britain, France & America in order to justify the airstrikes. The UK publicly supported the White Helmets that are a branch of Al Qaeda. https://t.co/aAe2xdTv1P

Fake news is also used in everyday speech and writing, sometimes earnestly in the face of negative information and sometimes ironically to call out somebody’s inconsistencies and shortcomings. 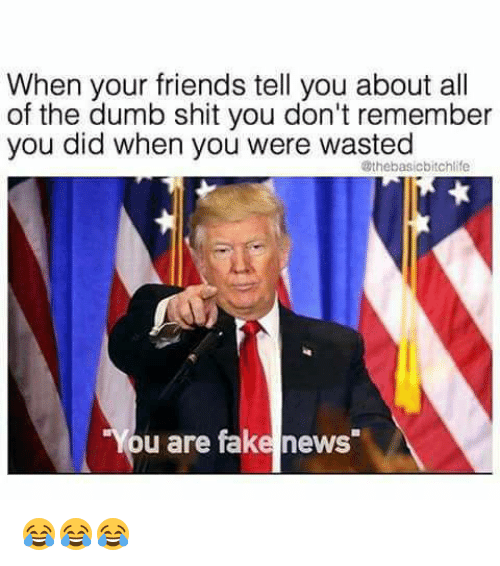 This is not meant to be a formal definition of fake news like most terms we define on Dictionary.com, but is rather an informal word summary that hopefully touches upon the key aspects of the meaning and usage of fake news that will help our users expand their word mastery.