Everything After Z by Dictionary.com
Previous Word: fake news
Next Word: Gitmo

Where does First Amendment come from? 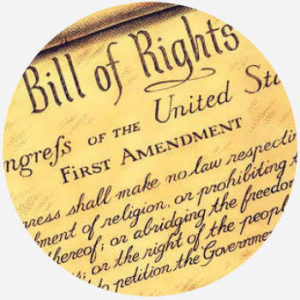 In 1787, members of the Constitutional Convention gathered in Philadelphia to revise the founding document of the country, the Articles of Confederation. They decided to create a new one instead, and by September, they’d drafted the Constitution. Getting the new document approved, however, was another story. Many opposed this new Constitution because it didn’t specify the rights of the people. The Constitution was only passed after Congress promised to add a list of rights afterwards.

It’s this proposed list of rights—the Bill of Rights, ratified in 1791—that yielded the First Amendment. Compared to some other amendments, it’s quite short. The full text reads:

Congress shall make no law respecting an establishment of religion, or prohibiting the free exercise thereof; or abridging the freedom of speech, or of the press; or the right of the people peaceably to assemble, and to petition the Government for a redress of grievances.

The freedoms this amendment protects—religion, speech and the press, assembly, and petition—are called the First Amendment freedoms or rights, both officially and colloquially invoked in the US.

Due to its brevity and ambiguity, issues regarding the interpretation of the First Amendment have been perennial points of debate throughout American history. The specific application of these rights, like other rights, has been a matter often judged by the Supreme Court. For instance, cases have determined that the First Amendment’s free speech clause doesn’t protect “fighting words,” which is defined as speech intended to cause injury or breach of the peace, and that school libraries can’t remove books because school officials disagree with their content.