Everything After Z by Dictionary.com
Previous Word Jim Crow laws
Next Word Make America Great A...

What does Magna Carta mean?

The Magna Carta is an English charter that was signed into law by King John on June 15, 1215. Some of the best-known concepts outlined in the Magna Carta include making the monarch subject to the rule of law, basic rights held by citizens (or “free men”), and the social contract between ruler and subjects.

“Magna Carta originated as a peace treaty between King John and a group of rebellious barons. Its influence can be seen in other documents across the world including the UN Universal Declaration of Human Rights, and the US Constitution and Bill of Rights.”
“Magna Carta changed the world, David Cameron tells anniversary event,” BBC (June 15, 2015)
“The Magna Carta’s idea that a person should not have his property or liberty taken by the government except by pre-existing law and procedures has become known as the ‘rule of law.’ This means that there must be established procedures and laws in place before someone suffers a loss at the hands of the government. Additionally those laws and procedures are to be administered by an impartial third party.”
David J. Shestokas, “The Fifth Amendment’s Due Process Clause, Descendant of the Magna Carta,” shestokas.com (April 30, 2015)
“The original Magna Carta is not expressly recognised in today’s law: it barely survived the summer of 1215, with King John resiling from his agreement to grant a series of concessions on grounds of duress. But a weak Crown needed to earn consent from both the church and the nobility and further, shorter versions were granted by John’s successor Henry III. It is the 1225 version that was later encoded into statute by Edward I’s parliament in 1297, and it is the bare remnants of this statute which survive today.”
Kevin Bonavia, “Magna Carta: Still Relevant?” The Law Society Gazette (June 25, 2015)
SEE MORE EXAMPLES

Where does Magna Carta come from? 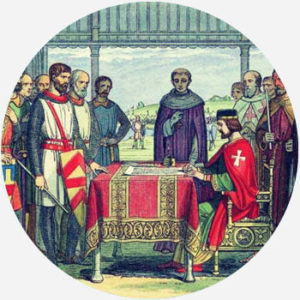 In the late 12th and early 13th centuries, King John of England drew the ire of many English nobility with a series of unpopular military decisions and aggressive taxation. Led by Baron Robert Fitzwalter, the barons and other nobles under John’s rule rebelled. In order to avoid civil war, King John was forced to sign the Magna Carta, which was written by the barons.

The document mostly dealt with the barons’ property rights and the monarch’s accountability to law, neglecting the poorer population. However, in subsequent centuries, the document was revised to include other clauses that granted more rights to the general populace, including the right of habeas corpus (the right to a trial by judge and jury before being imprisoned) and the right to a speedy trial.

This document and the precedent it set served as the foundation for many forms of law created post-Enlightenment, including the American Constitution and the French post-revolutionary government. Today, the Magna Carta is considered an important milestone in the development of civil rights and the people’s power in a government.

This is not meant to be a formal definition of Magna Carta like most terms we define on Dictionary.com, but is rather an informal word summary that hopefully touches upon the key aspects of the meaning and usage of Magna Carta that will help our users expand their word mastery.