What does manifest destiny mean?

Manifest destiny is an unofficial doctrine that characterized the US attitude toward territorial expansion during the 19th and 20th centuries. It rested on the principles that American society was inherently of higher value than others, and that it was an imperative and inevitable mission to incorporate the rest of the North American continent into the United States.

Where does manifest destiny come from? 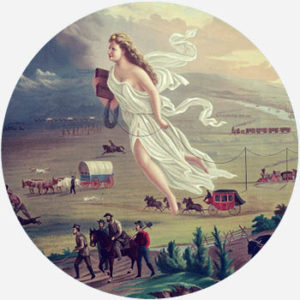 In the early 19th century, American settlers were steadily colonizing the western regions of North America. Beginning with Thomas Jefferson’s purchase of the Louisiana territory in 1803, both the government and the citizens of the United States embarked on a mission to claim land for themselves. Though this land was already occupied by indigenous peoples, Americans felt entitled to westward expansion and land ownership, which continued despite clashes with the land’s existing inhabitants.

The term manifest destiny was popularized by columnist John O’Sullivan, who penned an article in 1845 that denounced other nations for “limiting our greatness and checking the fulfillment of our manifest destiny to overspread the continent allotted by Providence for the free development of our yearly multiplying millions.” Manifest destiny quickly became a popular phrase that described and celebrated the American “right” to expansion. Manifest destiny would be used to justify and champion events like the Mexican-American War. However, the 19th century saw an end of manifest destiny due to disputes over slavery in the newly acquired western territory, which stalled the focus on expansion and ultimately led to the American Civil War.

However, manifest destiny was briefly revived in the post-Civil War era. Newly rejoined and searching for political and economic capital during a time of industrial prosperity, the United States made vigorous attempts to claim southern land, including the island of Cuba and areas in Central America. President Theodore Roosevelt was a strong advocate for manifest destiny and American expansion, and it wasn’t until President Woodrow Wilson’s policy of non-interventionism during World War I that manifest destiny lost its motivating power in American foreign policy.

“The term “Manifest Destiny’ was coined to capture the 19th century spirit of American expansion from coast to coast: East to West. Mankind’s 21st-century manifest destiny points in a different direction: South to North.”
Parag Khanna, “Climate Change Is Forcing a New Manifest Destiny,” TIME (April 18, 2016)
“My Mom’s People availed themselves of traditional Manifest Destiny—rolling west from their English roots.”
Luis Alberto Urrea, “Manifest Destiny,” Orion Magazine (April 27, 2012)
“The vision of manifest destiny, she says, has had ‘all sorts of applications over time, many of which have been devastating to different communities. And yet it is also so ingrained in the history of being American, the way we think about aspiration and ambition, achievement and taking. It ties to everything from the capitalist impulse to notions of exploration, and to the desire to know.’”
Shamin Momin, quoted by Su Wu, “A Two-Year, 100-Billboard Celebration of Going West,” The New York Times Magazine (June 23, 2015)
SEE MORE EXAMPLES

This is not meant to be a formal definition of manifest destiny like most terms we define on Dictionary.com, but is rather an informal word summary that hopefully touches upon the key aspects of the meaning and usage of manifest destiny that will help our users expand their word mastery.