What does Medicare for All mean?

Medicare for All is a proposal to expand Medicare, the US federal program that provides health insurance to the elderly and people with certain disabilities, to everyone in the United States.

Where does Medicare for All come from?

Since the turn of the 20th century, progressives have unsuccessfully advocated for universal, single-payer healthcare, in which the government (or a publicly owned regulatory agency) provides healthcare everyone from a single fund (paid by taxes). Medicare for All is one of the latest and most prominent iterations of this long effort.

Medicare was signed into law by Lyndon Baines Johnson in 1965 (under the Social Security Amendments of 1965) on the heels of previous attempts, notably by Franklin Delano Roosevelt and Harry Truman. Johnson also signed Medicaid into law, which provides hospitalization and medical insurance for persons of all ages within certain income limits.

Medicare is a single-payer system, which means the government covers the cost of health insurance through taxes. Medicare provides health insurance and care to those people over the age of 65 and those with certain disabilities or illnesses. Forms include (under different parts of the program) hospital insurance, medical insurance, and prescription drug coverage. 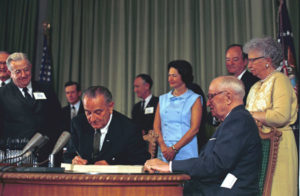 Beginning in the early 2000s, legislators began once again proposing that Medicare cover all people, calling it Medicare for All. Early proponents of this were the late, legendary Senator Paul Wellstone of Minnesota, who used the phrase Medicare for All in his 2002 political memoir (the phrase may appear earlier in Canadian contexts as an unofficial name for its national healthcare).

In 2009, during the debates in the run-up to the passage of the Affordable Care Act (often referred to as Obamacare), Senator Bernie Sanders of Vermont championed a Medicare for All in the Senate. While Senator Sanders was unsuccessful in getting this legislation passed, it became a central part of his 2016 and 2020 presidential campaign. Michigan Representative John Conyers introduced the Expanded & Improved Medicare for All Act in Congress in 2017; Sanders also introduced a Medicare for All Act in 2017 in the Senate.

During the 2020 presidential campaign, many Democratic candidates for president have expressed support for a Medicare for All plan, including Senators Elizabeth Warren (MA) and Kamala Harris (CA) in addition to Sanders. However, some Democratic candidates have expressed reservations about a Medicare for All plan, namely because of the potential cost and disruption to the private healthcare market.

I tried to figure out what Joe Biden thinks about Medicare for All.

Examples of Medicare for All

As long as private health insurance companies are allowed to make as much money as they want, our health care system will not work. We need Medicare for All.
@BernieSanders, April 2019
Hearings are needed to determine “how House Democrats expect to address the massive costs associated with Medicare for All,” Walden and Health subcommittee ranking member Michael Burgess (R-Texas) wrote in a letter to Energy and Commerce Chairman Frank Pallone (D-N.J.), demanding the committee move to scrutinize the policy.
Alice Miranda Ollstein, Politico, February 2019
"Medicare for All" typically refers to a single-payer health care program in which all Americans are covered by a more generous version of Medicare, the health-insurance program for the elderly, that would replace all other existing public and private plans, with few exceptions.
Benjy Sarlin & Jeremia Kimelman, NBC, June 2019
SEE MORE EXAMPLES

Who uses Medicare for All?

What’s most striking about the poll we released today is not Bernie's lead over Trump in WI, MI, and PA, but how when we threw the kitchen sink of arguments against Medicare for all, it still led by +/- 20 points. https://t.co/tDlNCy1TdU pic.twitter.com/zBEhpJzQWn

Republicans generally oppose Medicare for All over concern about its potential costs and belief that health insurance and care should be left to the private market. Proponents of Medicare for All believe it would expand and lower the cost of coverage.

FYI: Sanders is running his 2020 campaign on a promise to move the United States to a “Medicare-for-all” system, which would result in a radical government takeover of the health care system and eliminate nearly 180 million private health insurance plans.

Medicare for All is often used as a catch-all term for a variety of universal or single-payer healthcare plans (sometimes including the public option, a federal health insurance that would compete with private companies), whether or not they are actually based on Medicare. The phrase is often hyphenated when used as a modifier, e.g., a Medicare-for-all plan.

This is not meant to be a formal definition of Medicare for All like most terms we define on Dictionary.com, but is rather an informal word summary that hopefully touches upon the key aspects of the meaning and usage of Medicare for All that will help our users expand their word mastery.