What does Patriot Prayer mean?

Patriot Prayer is a small, right-wing political group most active in the Pacific Northwest.

Frequently showing up to demonstrations armed, Patriot Prayer has been involved in inciting violence with left-wing activists, notably in Portland, Oregon. Rallies held by Patriot Prayer have been attended by members of a larger far-right extremist group, Proud Boys.

Where does Patriot Prayer come from? 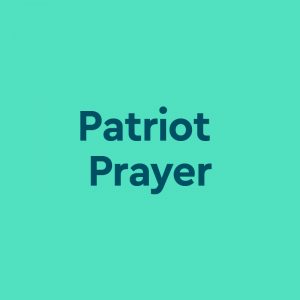 Patriot Prayer was founded in 2016 by Joey Gibson, a right-wing activist. Gibson said he formed Patriot Prayer after seeing TV news reports of attacks on supporters of President Donald Trump by left-wing protestors at a Trump campaign rally in San Jose, California, in June 2016.

Previously, Gibson had been a regular critic of President Barack Obama and left-wing politics more generally on his Twitter account, now the Patriot Prayer account on the social media platform.

According to its website, Patriot Prayer positions itself as a defender of gun rights and free speech, among other things. In speeches, Gibson has expressed anti-government views and maintains he and Patriot Prayer are defending American citizens from far-left groups such as Antifa, who he claims are “Communists” that “hate freedom” and “hate God.”

Since 2016, Patriot Prayer has been involved in several violent altercations with people associated with Antifa as well as supporters of Black Lives Matter. In October 2018, the South Poverty Law Center (SPLC) described Patriot Prayer as “Joey Gibson’s crew of violent extremists” after the group engaged in brawls with members of Antifa and Black Lives Matter in Portland, Oregon.

In 2020, Patriot Prayer made national headlines after a supporter of Patriot Prayer was shot and killed during a violent clash between right-wing groups and left-wing counterprotestors during a pro-Trump rally in Portland, Oregon. President Trump tweeted condolences for the deceased man. Oregon governor Kate Brown accused Patriot Prayer of instigating the violence.

Praying for a rainstorm so strong across the West Coast that it disarms the terrorists and destroys their attempt at burning down our country.

As part of its crackdown on the activity of violent militias, Facebook removed Joey Gibson and Patriot Prayer’s pages from its site in early September 2020.

For years, basically since the moment Patriot Prayer was founded, their events have been a recruitment feeding frenzy for open neo-nazis
@RiotDoge, August 30, 2020
The fatal shooting of a Patriot Prayer supporter at protests in Portland, Oregon this weekend has cast a national spotlight on a small but vocal group of conservative activists that emerged after President Donald Trump’s 2016 election.
Gabriella Borter and Andrew Hay, Reuters, September 1, 2020

Patriot Prayer is frequently discussed (and criticized) in the specific context of violent clashes at political protests and rallies as well in the broader context of the rise of far-right groups in the U.S. and around the world.

Patriot Prayer is a far-right group in the Pacific Northwest that has hosted rallies often attended by hate groups and anti-government extremist groups. They also frequently engage in violence against their political opponents. Learn more ⬇️ https://t.co/m1uBfko7CQ

Black people, don't get caught up in the various NAMES of these different anti-Black extremist groups.
*The Klan
*The Skinheads
*The Alt Right
*The Proud Boys
*Patriot Prayer
*Boogaloo Bois
*III %ers
etc..

They are ALL white supremacist groups..And thats all you need to know

This is not meant to be a formal definition of Patriot Prayer like most terms we define on Dictionary.com, but is rather an informal word summary that hopefully touches upon the key aspects of the meaning and usage of Patriot Prayer that will help our users expand their word mastery.