What does writ of habeas corpus mean?

The writ of habeas corpus, often shortened to habeas corpus, is the requirement that an arrested person be brought before a judge or court before being detained or imprisoned.

Where does writ of habeas corpus come from? 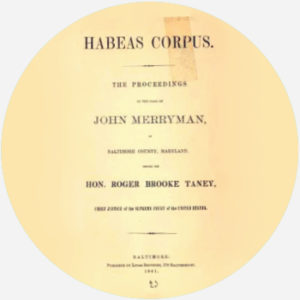 Attested as an English legal borrowing by the 1460s, habeas corpus literally means in Latin “you shall have the body,” or person, in court, and a writ is a formal order under seal, issued in the name of a sovereign, government, court, or other competent authority. So, a writ of habeas corpus is a court order to bring a person who’s been detained to court to determine whether or not their detention is valid. It’s a failsafe to prevent the government from imprisoning people without cause.

The writ of habeas corpus originated in Medieval English common law. It’s difficult to say exactly where it first appeared in writing, but it was most famously codified in the 1215 Magna Carta, which granted all free men protection against illegal imprisonment. This English law was brought over to the North American British colonies. In turn, the US Constitution, which was influenced by the Magna Carta, explicitly charges: “The Privilege of the Writ of Habeas Corpus shall not be suspended, unless when in Cases of Rebellion or Invasion the public Safety may require it.” Many other modern countries include writs of habeas corpus in their constitutions.

In 1863, President Abraham Lincoln famously used an executive order during the Civil War to suspend the writ of habeas corpus to keep Maryland, and important train routes between Washington, DC and the North, from falling to Confederate sympathizers. Because the Constitution allows for suspension in the event of rebellion, Lincoln was within rights to do this (England had also suspended the writ during past emergencies). Still, the decision was controversial, as it meant those suspected of being associated with the Confederacy could be imprisoned without trial.

The writ of habeas corpus was also suspended in some instances in World War II, notably by the governor of Hawaii after the attack on Pearl Harbor. In the 2010s, the writ has been the subject of much legal dispute over the detention of suspected terrorists, especially concerning the detainees held in Guantánamo Bay without charge. In 2008, the Supreme Court found the Military Commissions Act of 2006 unconstitutional, which President Bush signed into allowing for the detention of “unlawful enemy combatants” against the US.

In common legal practice, the writ of habeas corpus is invoked in cases where someone believes they’ve been wrongly detained. This applies to both people in prisons and people who are in mental institutions. Essentially, one could petition the court for a writ of habeas corpus, which, if granted, would give them a court date to determine the legality of their imprisonment. Such a trial could result, and has, in release from custody or reduction in sentence.

Examples of writ of habeas corpus

Bloomfield, who pleaded guilty in 2008 to murdering five people in New Mexico, filed a writ of habeas corpus to withdraw his guilty plea.
“Attorney General's Office helps keep murderer behind bars,” Silver City Sun-News (May 25, 2017)
The granddaddy of all American constitutional crises was precipitated by Southern secession in 1861. In one particularly striking sub-crisis, President Abraham Lincoln suspended the writ of habeas corpus, citing Article I, Section 9 of the Constitution, which says that ‘The Privilege of the Writ of Habeas Corpus shall not be suspended, unless when in Cases of Rebellion or Invasion the public Safety may require it.’
Noah Feldman, “Hold Your Tongue: This Isn't a 'Constitutional Crisis',” Bloomberg (May 12, 2017)
President Rodrigo Duterte on Wednesday afternoon announced that the writ of habeas corpus had been suspended in Mindanao following his declaration of martial law on the island Tuesday night after clashes between security forces and bandit groups left three people dead and several others hurt.
Audrey Morallo, “Habeas corpus suspended in Mindanao, says Duterte,” The Philippine Star (May 24, 2017)
SEE MORE EXAMPLES