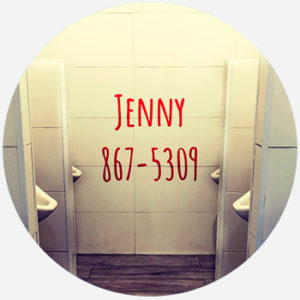 “867-5309/Jenny” was released in 1981 by the American band Tommy Tutone. It hit #4 in mid-1982 on the Billboard Hot 100 Chart and, as their only major success, gave Tommy Tutone the reputation as a one-hit wonder. The zero in the title is pronounced like the letter O.

The song is about a girl named Jenny whose number had been written on a wall. The singer hopes to call her, but is thwarted by his own fear. Nevertheless, he entreats her not to change her number, because someday he’ll be brave enough to call and will sweep her off her feet.

Conflicting stories exist as to the origin of the song’s hook, the telephone number 867-5309. Tommy Heath, the lead singer, once claimed that he got the number from a girl who wanted him to give it to his lead guitar player. Instead, he wrote it on the bathroom wall. Some say that he makes up a new story every time he’s asked about the origins of the named number.

Jim Keller, the lead guitarist of the band, claims that Jenny was a girl he knew, and that some friends wrote her number on the wall of a men’s room as a prank. Keller says he called her and they dated for some time. Yet Alex Call, who co-wrote the song with Jim Keller, claims there was never any Jenny and that 867-5309 came to him “out of the ether.”

@realDonaldTrump cracks open nuclear football to find '867-5309' scrawled on the back of a grease-stained placemat #nocodesforyou
@TheOriginaldUb, April 12017
What if Stacy's mom was Jessie's girl and her number was 867-5309?
Nelly Gardewine, Facebook, April 27, 2017
Giving out numbers using other sets of numbers runs the risk of random people suddenly being called by people looking to speak with someone they saw on TV. (Ask anyone whose number is 867-5309.)
Philip Bump, “A directory for Klondike-5, the most famous telephone exchange in the world,” The Washington Post, April 7, 2017
SEE MORE EXAMPLES

The song caused some havoc for people with the actual phone number 867-5309, incidents which may have helped cement its status in pop culture. After the song’s release, people all across the US, out of curiosity or mischief, flooded the phones of people who happened to have the phone number 867-5309. Decades later, the novelty of 867-5309 endures, as individuals seek out (and later sell for sometimes large sums of money) the number, and businesses incorporate it into their marketing and advertising campaigns. Some singles even give out 867-5309 as a fake number to interested parties either as a joke or because they don’t want to give out their actual numbers.

This is not meant to be a formal definition of 867-5309 like most terms we define on Dictionary.com, but is rather an informal word summary that hopefully touches upon the key aspects of the meaning and usage of 867-5309 that will help our users expand their word mastery.