or ADIDAS or adidas [uh-dee-duh s]

What does Adidas mean?

Adidas is a Germany-based international sportswear brand specializing in shoes.

Its name is popularly, though wrongly, said to be an acronym for All Day I Dream About Soccer or other such words beginning with S.

Where does Adidas come from? 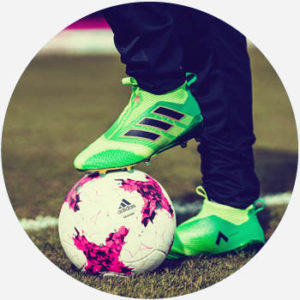 In 1924, two brothers, Adolf and Rudolf Dassler, founded a shoe company in Herzogenaurach, Germany called the Gebruder Dassler Schuhfabrik (Dassler Brothers Shoe Factory). They ran the company together successfully until 1948, when a rift compelled them to split the business.

Adolf named his company Adidas after his own name, blending Adi (a nickname for Adolf) and the first part of his last name, Das(sler). Rudolf similarly named his new business after himself, Ruda, though it was soon after changed to Puma. Puma and Adidas have been fierce competitors ever since.

Since at least the 1970s, people have been claiming the name Adidas is an acronym taken from the initials of All Day I Dream About Soccer or Sports. While these so-called backronyms are false, they have nevertheless proven to be popular folk etymologies commonly spread. They’ve even inspired more playful or provocative backronyms. One joke is that Adidas stands for All Day I Dream About Smoking (marijuana), likening the company’s leaf-like logo to a cannabis plant. Another was popularized by the metal band Korn in their 1996 song, “All Day I Dream About Sex.”

Adidas merchandise is easily recognizable from the distinctive, triangle-grouped three stripes that brand their merchandise, a design the company purchased from the Finnish Karhu Sports in 1952. While best known for its athletic and casual footwear, Adidas’ lines of t-shirts, tracksuits, and other athletic and leisure clothing make it the second-largest sportswear company in the world after Nike.

One line of casual shoes, the Samba, was extremely popular in the 1980–90s, around the time the shoes were prominently referenced in an influential, and now iconic, early rap song, “My Adidas,” by Run-D.M.C. The song features the memorable lyrics: “We make a good team, my Adidas and me. / We get around together, rhyme forever, / And we won’t be mad when worn in bad weather.”

just found out adidas stands for all day I dream about sport AND I AM SHOOK
@CeiliAura, February, 2018
After it’s final SS18 drop a couple of weeks back, Palace has teased its latest collaboration with adidas Originals.
Candice Nembhard, Highsnobiety, April, 2018
All / Day / I / Dream / About / Standing for something that matters / @adidas please sign @Kaepernick7 with or without an NFL contract
@Em_anating, April, 2018
SEE MORE EXAMPLES

As a leading international brand, Adidas is widely known for its sportswear—and is widely referenced in athletic, business, urban fashion, and everyday contexts in both speech and writing. Many may be familiar with the brand thanks to its sponsorship of professional athletes and its provision of official uniforms for very professional sports teams and leagues.

This ADIDAS backronym wordplay has extended to other brands, such as Puma, jokingly said to stand for Piss Under My Ass.

This is not meant to be a formal definition of Adidas like most terms we define on Dictionary.com, but is rather an informal word summary that hopefully touches upon the key aspects of the meaning and usage of Adidas that will help our users expand their word mastery.