What does American muscle mean?

American muscle is the collective term for high-powered American cars, particularly those from the 1960–70s.

Where does American muscle come from? 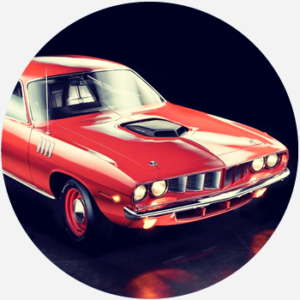 Likening muscle to horsepower, American performance cars were first called muscle cars in the 1960s. A 1965 issue of Popular Science noted how the option of a high-horsepower Hemi-426 engine made the Dodge Coronet a muscle car. Car and Driver used the same term to describe the Pontiac GTO. Notable models of Buick, Chevrolet, Ford, and Plymouth cars, all of which tend to be two-door sports coupes, were also designated as muscle cars during this period.

In 1977, as car imports were increasing in the United States, the Complete Guide to American Cars described this class of vehicle as American muscle. Car and Driver would call it “uniquely American” in 1985, so use of American muscle emphasizes the car’s American-ness as way of differentiating it from other vehicles (e.g., Australian muscle cars).

This nostalgia continued into the 2000s. A 2003 letter to Road and Track, for instance, asked if a resurgence of great American cars was coming in response to an article titled “American Muscle.”

We all have our own idea of the perfect car. For some of us, it is those iconic examples of American Muscle that are deemed a ‘must-have’ for any collection of cars.
Jesse James, Stupid Dope, April, 2018
Who loves classic American muscle? We do! So the team at our West Carrollton store was happy to install a new @KENWOODUSA radio in this second gen #Pontiac #TransAm.
@CCSDayton, April, 2018
Build a car based on today’s amazing technology, cover it in a skin that hints at the golden age of American muscle machines, and you have yourself a Chevy Camaro. Or a Ford Mustang. Or a Dodge Challenger...Point is, the romance of car rivalries from the past is an excellent way to market and sell more cars.
Brian Chee, New York Daily News, April, 2018
SEE MORE EXAMPLES

American muscle is widely used by classic car drivers, collectors, and enthusiasts as well as by museum exhibits and expositions of muscle cars.

American Muscle is used as a brand name for model car kits and for Ford Mustang parts. Classic American Muscle is a vehicle-class designation used in motorsports competitions by the Sports Car Club of America.

American muscle  is sometimes used to refer to the engine or power of a car, specifically, rather than the car as a whole. Automobile Magazine described “a car with American Muscle” and Hispanic Business described a Pontiac as having “European styling, American muscle.”

Prior to its automotive use, American muscle was used to describe the American labor force, American athletes, and American military power. American muscle is still sometimes used in these contexts. The band 1 AMVRKA released a song titled “American Muscle,” as “an ode to the working class” in 2017.

This is not meant to be a formal definition of American muscle like most terms we define on Dictionary.com, but is rather an informal word summary that hopefully touches upon the key aspects of the meaning and usage of American muscle that will help our users expand their word mastery.